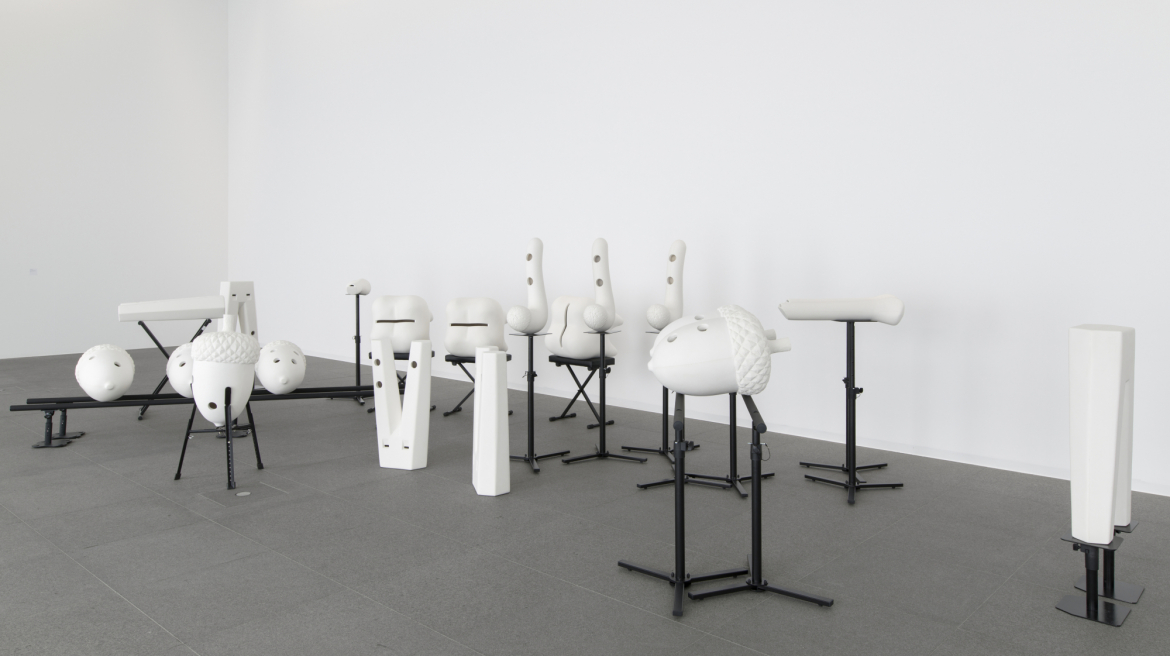 As its title suggests, A Certain Decade, the first retrospective in Belgium of Gaillard & Claude since they moved to Brussels in 2008, looks back on the French artist duo’s artistic production over the past ten years. The Museum has set out to shed light on a work that is still little known to the general public, despite having been supported in Belgium by independent venues (Établissement d’en face, Deborah Bowmann), exhibition curators (Jean-Paul Jacquet) and major artists (Michel François). As critical yet amused observers of the social imaginary of our time, since their partnership began in the early 2000s Gaillard & Claude have cultivated an art of absurd intrusion and poetic incidents, which questions the paradoxes of our postmodern society with a humor close to English nonsense and a taste for psychedelic excesses. From plaster sculpture to polyurethane bas-relief and marbled paper to printed textiles, via electronic music and the dramatisation of their own works, Gaillard & Claude’s polymorphous approach achieves its coherence through the fact that its references all bathe in the same “cultural magma”, with its prevailing spatial confusion and temporal discordance. By extending the 1960s mathematical Set Theory and the sociological and psychoanalytical research from French Theory into aesthetics, Gaillard & Claude also question the individual freedom within society, through perpetual round trips between the family dimension (individual and affective) and that of the group (collective and normative). Past masters in the subtle art of double meaning and inference, paradoxical affinities and unexpected convergences, scientific formulas and vernacular expressions, the duo thus produces complex works which invite the public to decipher them, like puzzles which appeal to intuition and poetic sensitivity.

In addition to the enigmatic sculpture UU (2013) and Troubles for a French Horn and a Bongo (2014), a limited series of unisex tracksuits produced in collaboration with stylist a.Knackfuss — made from a roll of fabric previously exhibited by Gaillard & Claude at Vitrine, Bermondsey Square, London — and worn during a performance by several personalities from the art world at the FIAC in Paris, the exhibition essentially focuses on three major bodies of work: Le Groupe et La Famille (2010), Orchestral Issues (2015-2017) and Baloney! (2020-2022).

In the series Le Groupe et la Famille, begun in 2010, Gaillard & Claude combine a sheet of marbled paper with an oversized paracetamol pill. The minimalist sobriety of the white pills and their standardised appearance (reflecting their habitually industrial production) contrast with the baroque character of the marbled papers, each one a unique print results from chance and the moment. The marbling is achieved by printing coloured pigments floating on the surface of the water onto a sheet of paper. This ancestral technique (called ebru, “cloud” in Persia) is also frequently used in early learning and art therapy.

Made by the duo from paracetamol molecules, the pills are potentially consumable and could satisfy the needs of a group of 200 to 300 people. Their disproportionate size and round shape evoke the idea of community. The psychedelic connotation of marbling refers both to atmospheres and to mental states. On difficult mornings after the night before, everyone turns on the screen of their conscience and immerses themselves in the meanders of their mind. It is a “pyjama drug” to cure a collective malaise.

The musical instruments that make up Gaillard & Claude’s orchestra are hollow organs whose mouthpieces and holes allow us to imagine the breath that passes through them.

Formally strange, they are nevertheless inspired by traditional instruments that Gaillard & Claude observed at the MIM in Brussels. These include the slit drums and double flutes shaped like legs, which have existed for several centuries and whose morphologies have been regularly revisited throughout history.

They were made of white plaster of Paris, a material generally associated with Fine Arts and classical sculpture. The duo reappropriates the academic method here with the intention of diverting it from its naturalist, anatomical standards.

Placed on the stands and tripods typically found in music studios and concert halls, this abstract ensemble gives the impression of forming an “orchestral body” embodying both the musicians and the instruments. Arranged in various ways according to the places where they are presented, the elements of the orchestra appear in various configurations: a quartet, quintet or sextet, for example. Thus questions of a social, collective or even emotional nature also implicitly arise within the orchestra, as within a “family”. Who will play with whom? What is each one’s status? What are their artistic ambitions, their political demands? 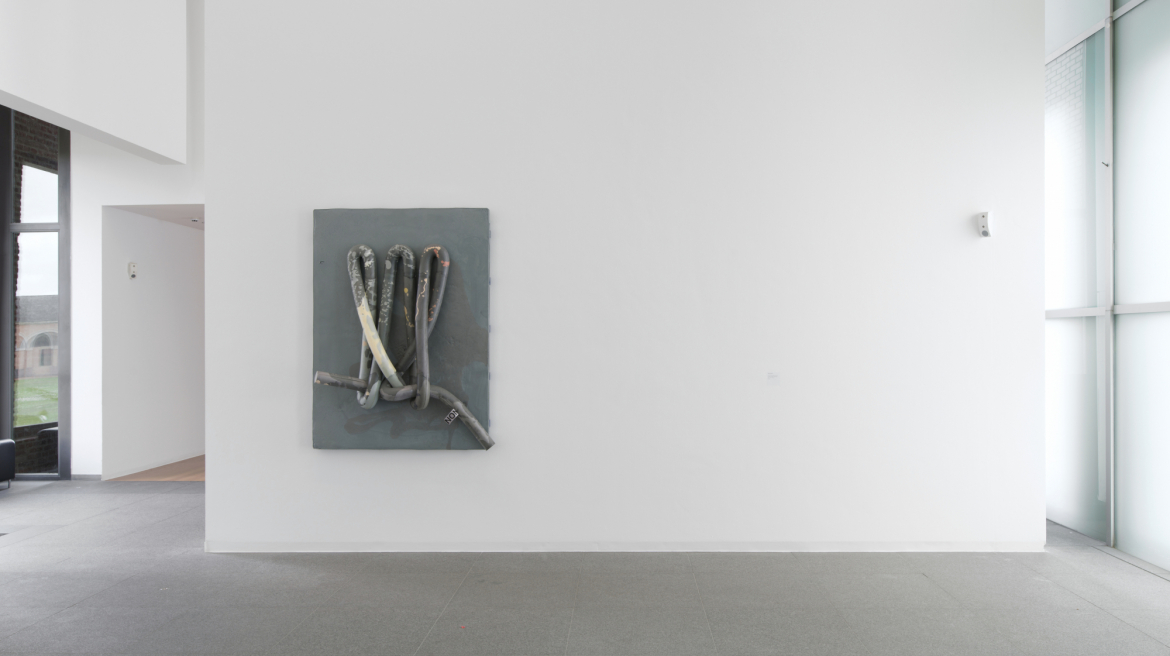 Talking Baloney is a series of bas-reliefs made from a knotted polyurethane sausage with a label attached at one end inscribed with the word “NO”.
Talking Baloney is a slang expression derived from the name of a Bologna sausage commonly used in the press to refer to the contorted speech of politicians.

Talking Baloney could therefore be understood as a metaphor for oral and written language where the intertwined sausages refer to two of its aspects: on the one hand, the convoluted detours that speech sometimes takes, and on the other, the upstrokes of calligraphy. The flexible form of this “nonsense” thus contrasts with the rigid, categorical “NO”, written in capital letters and composed in the industrial standards of printed writing.

By choosing polyurethane, Gaillard & Claude are offering a stage to a material with a paradoxical destiny: popular in the 1970s, its use has now become “politically incorrect” while remaining omnipresent—albeit hidden—in our daily lives. “Urethane is not going to disappear right away,” the duo told Patrice Joly for the magazine Zérodeux. “It is omnipresent in our daily lives, but camouflaged. Its applications are very wide-ranging and it has a variety of changing names. The new paint on our bikes we use to fetch our organic boxes is in urethane, we sleep on memory foam, we sweat at the gym in synthetic tops and we calm our anxiety disorders with a pharmacopoeia derived from urethane… If we chose this industrial molecule to produce coloured bas-reliefs, it is for its qualities of softness and expansiveness which are difficult to control on our scale. And also because it is not politically correct nowadays to produce urethane objects without a virtuous purpose. Channeling this foam into a long, flexible tube is an extravagant exercise. The distant goal is to produce an analogy of writing. By giving volume by loops, knots and suspensions, we touch the curve of a consonant, a vowel or an ampersand.”1 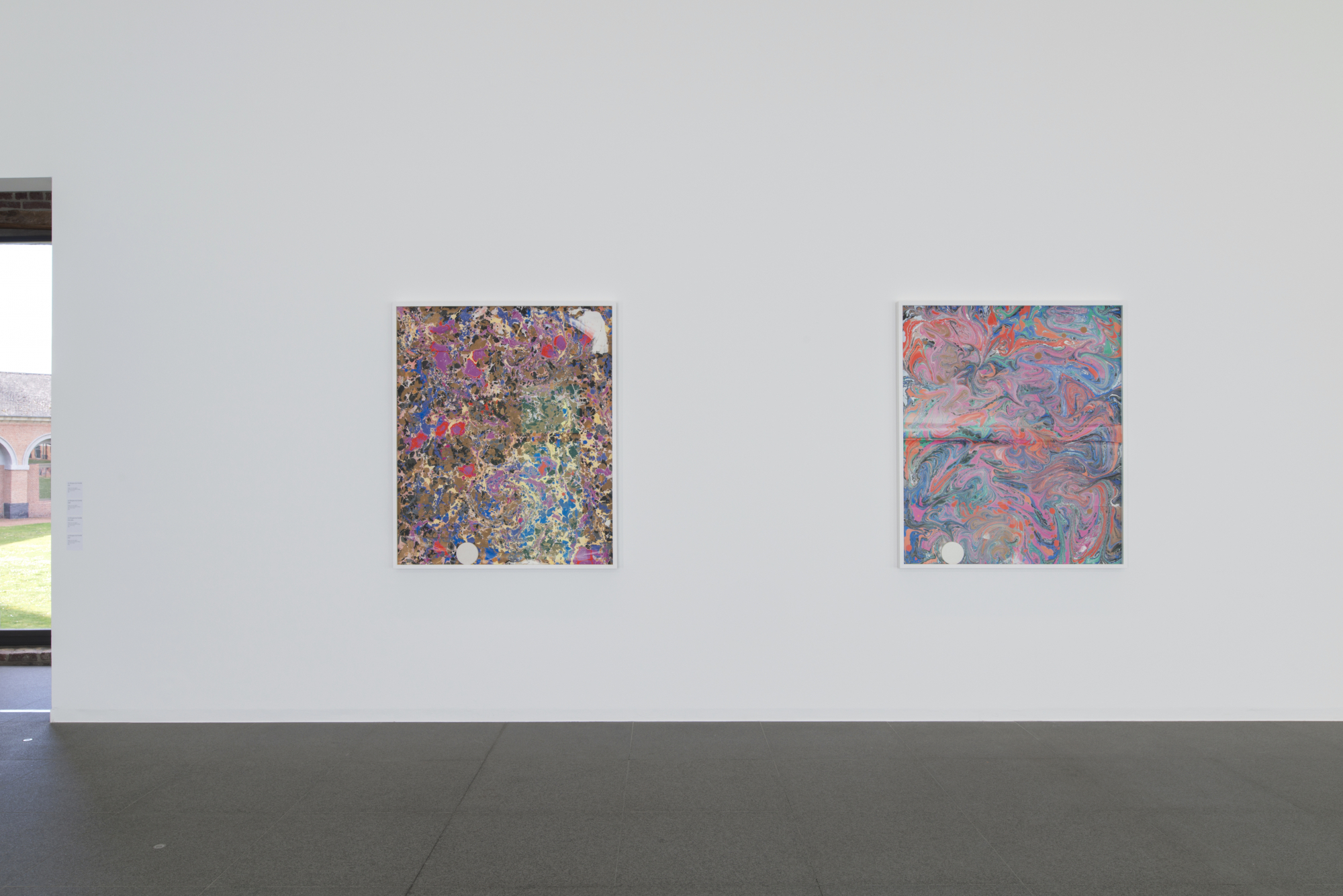 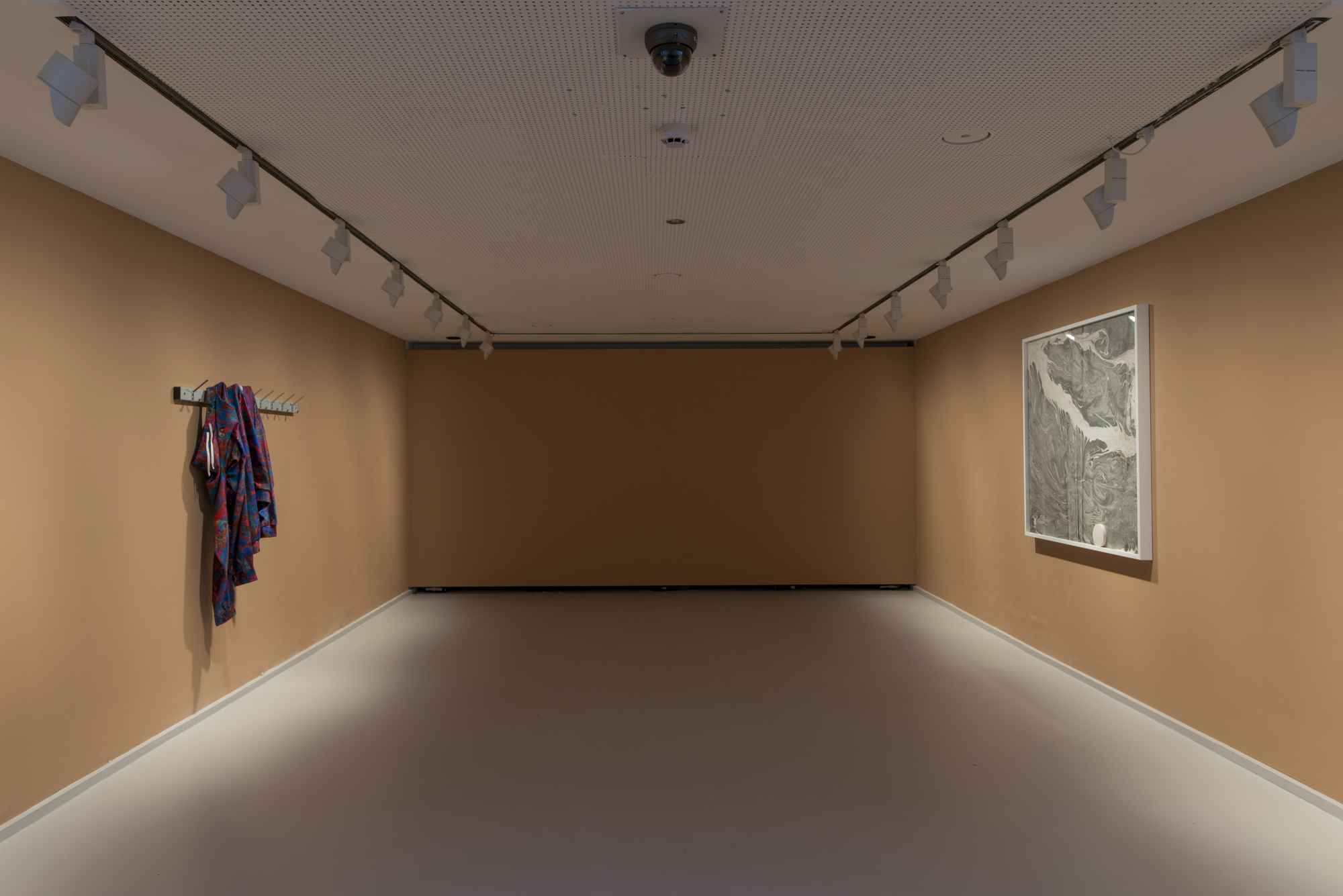 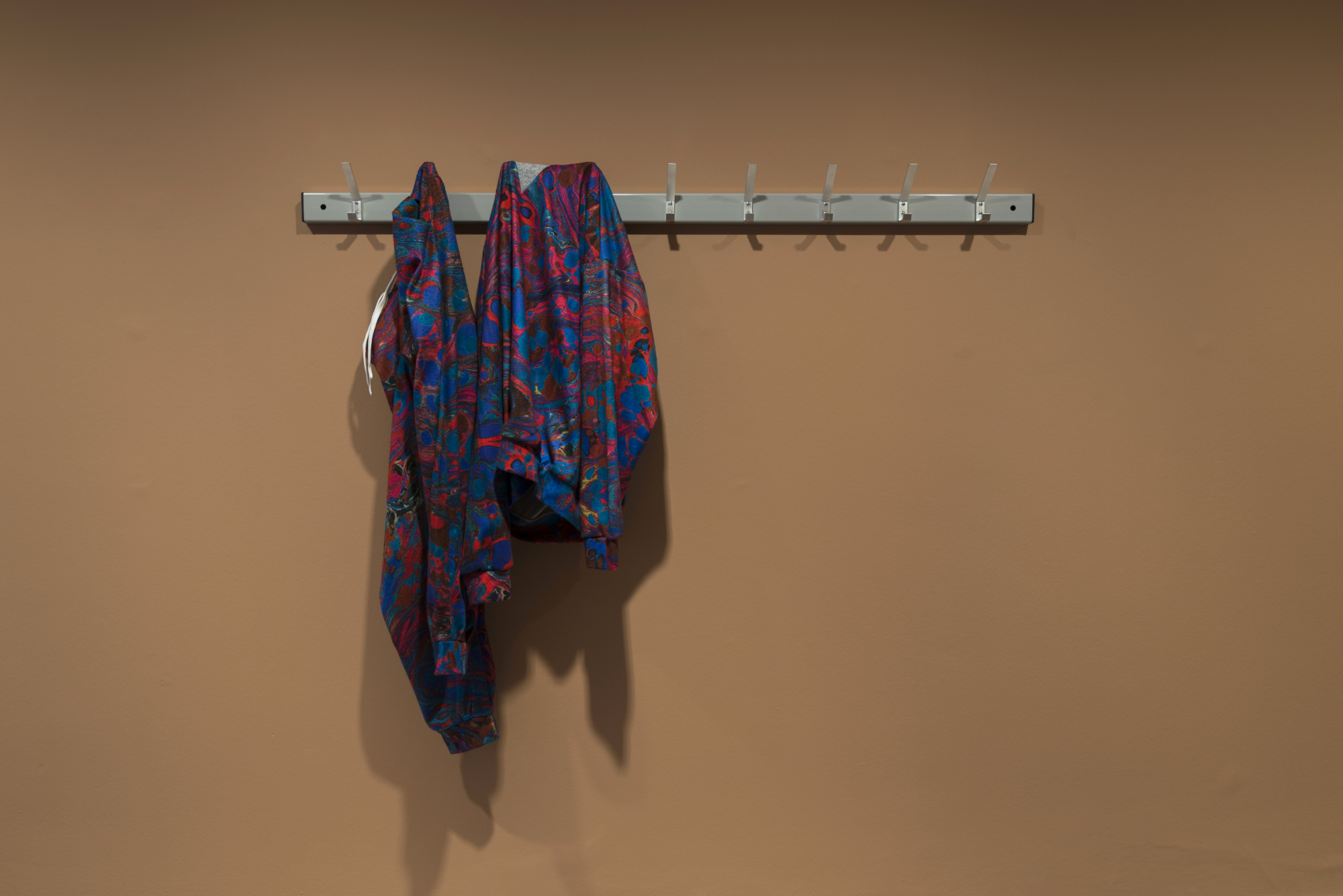 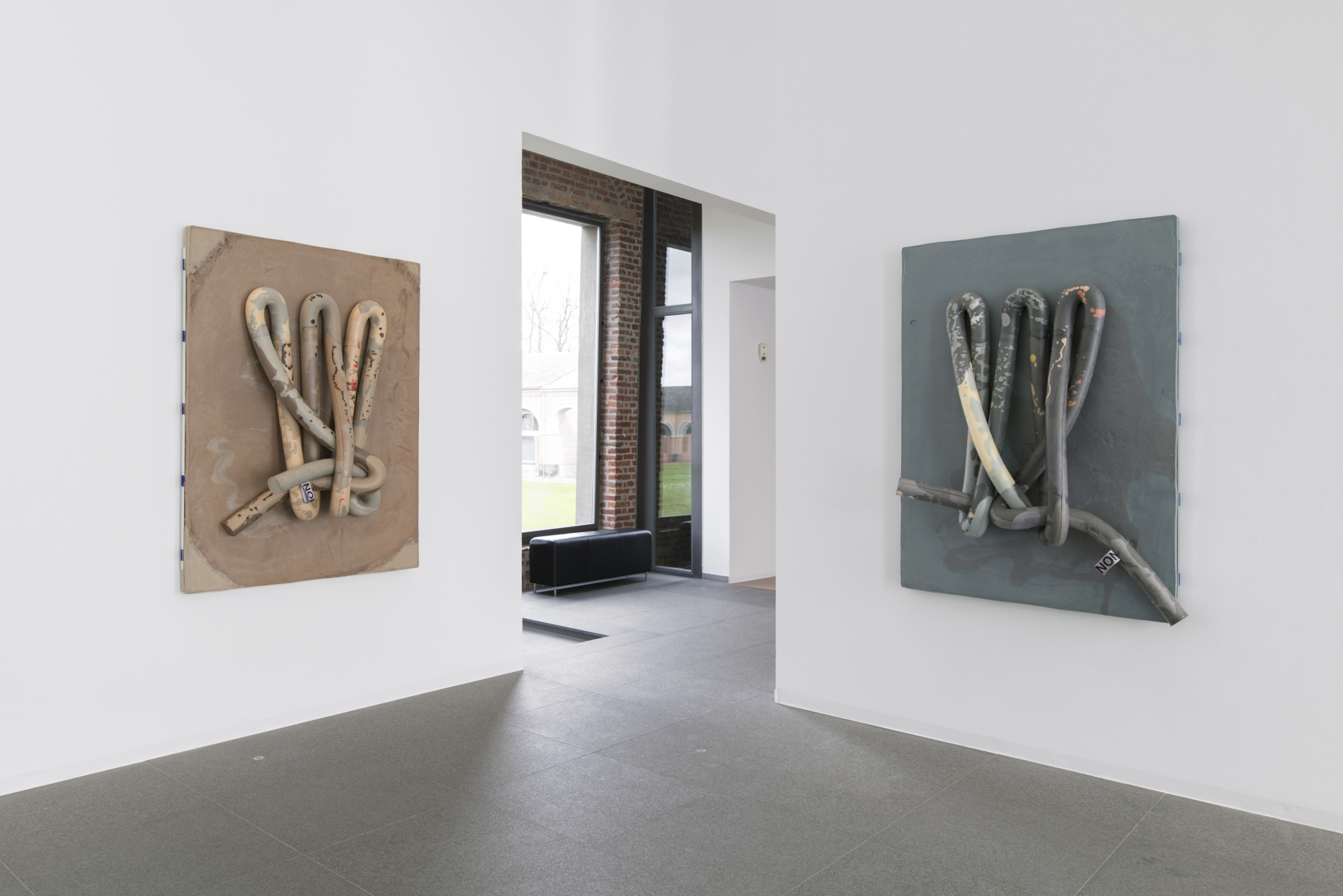 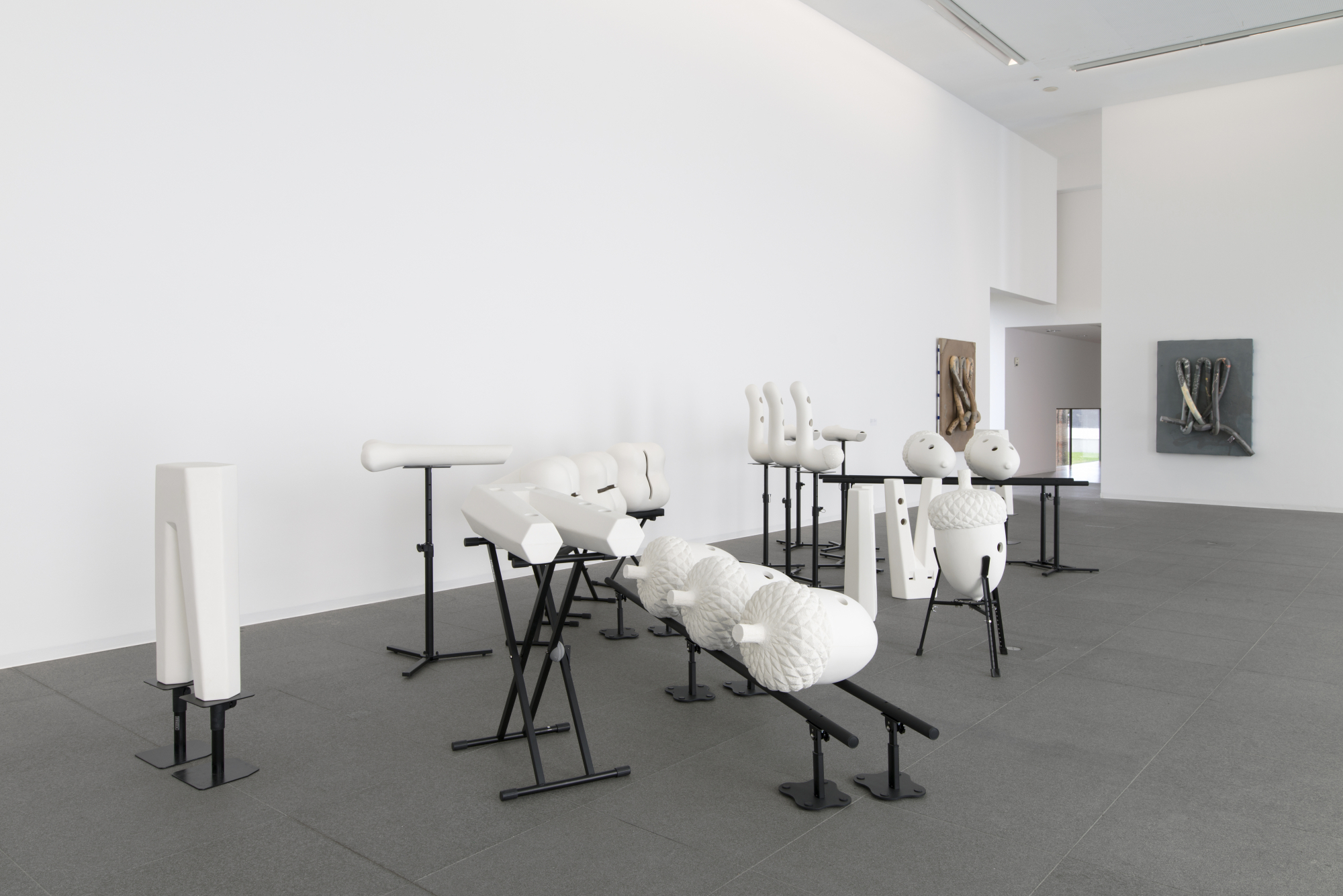 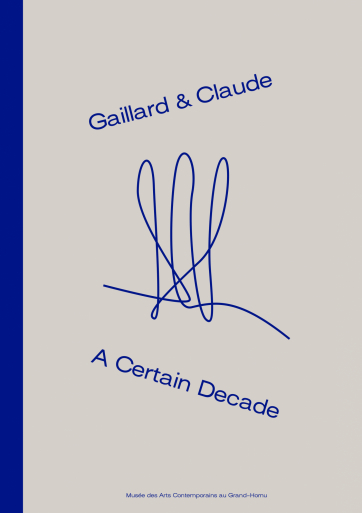 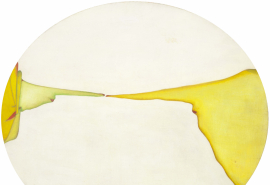 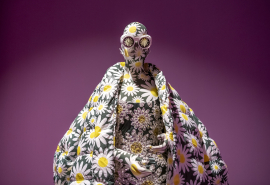 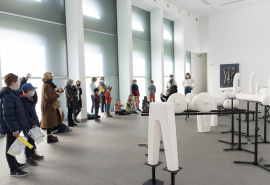