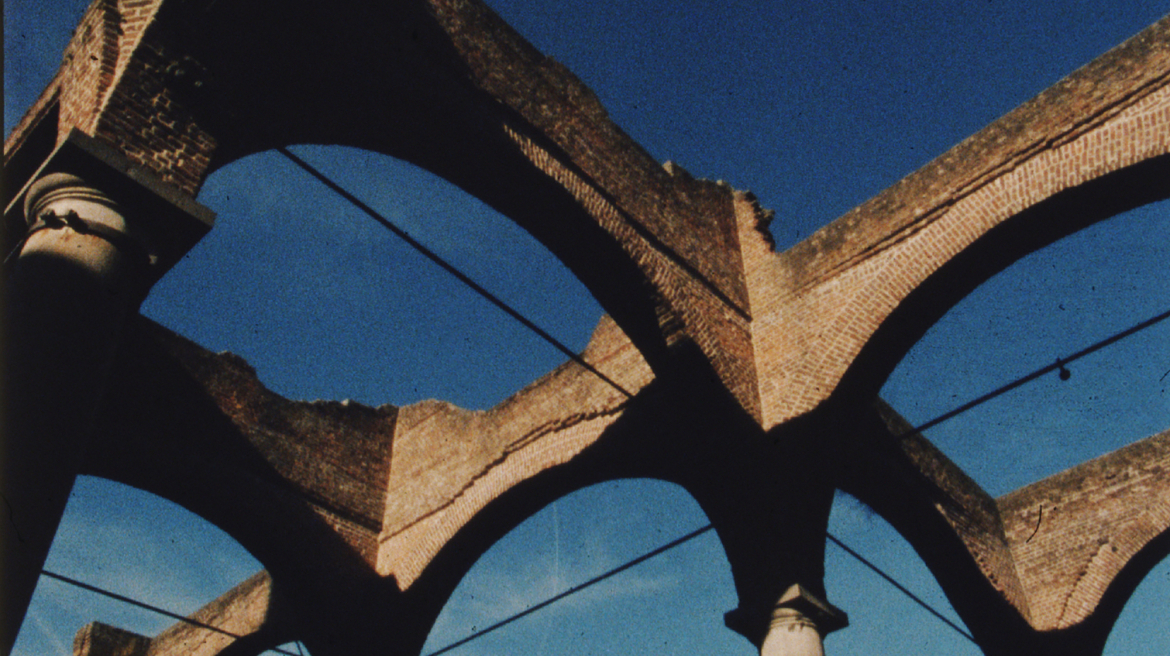 Occupying two identical rooms in the former “Engineers’ House”, of which only the outside walls of its original architecture now remain, the exhibition proposes a poetic, critical meditation on the theme of ruins, based on an installation by Oriol Vilanova belonging to the Museum’s collection, a double projection of films by Fiona Tan and a sculpture by Daniel Turner.

Several mosaics of images are arranged along the walls. Vues imaginaires (2017) consists of a collection of hundreds of postcards depicting ruins, mainly archeological or as a result of wars, which Oriol Vilanova gleaned from flea markets. In response to this, Ruins (2020) presents two films shot in the former Machines Room at Grand-Hornu by Fiona Tan during her recent residence at the MACS, the first a High-Definition video and the second on Super 16mm film. They are projected separately on screens placed at a distance from each other. As a sort of intermediary between these two installations and in response to Bertolt Brecht’s poem, a line from which inspired the title of this exhibition, Daniel Turner’s sculpture, RH2 (2012), extends our image of architectural ruins to a critique of the capitalist economy and its ‘creative destruction’ process through his salvaging of old refrigerator door handles, which he elevates to the status of archeological artefacts and whose incrusted grime from so many already ancestral hands is conserved. In this sense, the exhibition suggests that the equipment and edifices which we build to last are less “sheltered from time” but rather “shelters from time”, just like the societies and institutions from a time that is not so much long gone as in fact rediscovered in their vestiges and archives.

By making use of supports like the postcard and gelatin silver film, which have become obsolete through the rise of digital technology, Oriol Vilanova and Fiona Tan thus propose devices that slowly draw the spectator’s attention away from “the picture of the ruin towards the ruin of the picture”. For Vues imaginaires, this awareness of the duration of images is the result of a work in progress based on the exploration of flea markets, the selection and classification of his discoveries, the choice of the device to present his collections and finally, the “spaces” that are waiting for future discoveries. The artist-collector thus envisages an economy running counter to the industrial production of snapshots, in his search for “difference in repetition”. In Ruins, the preservation of technical defects in the cinematographic image, notably the grain of the photograph and scratches on the film, enable us to intuitively capture the duration by escaping from scientific time and our lack of imagination, echoing the effect of gaps in the actual ruins: “Things which were once inside, private and protected are laid bare and revealed,” notes Fiona Tan in relation to this reversal of the viewpoint. “The rooms, walls, corners and crevices are exposed to the elements. The building has been turned inside out, so to speak. I become aware of negative spaces and of what is missing. Like the terra incognita, the blank spaces on a map, each space or hollow is a puzzle and can point to potential creative possibilities.”

By exploiting such “negative spaces” each in their own way, according to an entropic vision of a world that is evolving in the wrong direction, the three artists take a doubly critical look at the paradox of modernity driven by obsolescence, and at the duration of works, “like the wall awaiting the ivy”, awaiting a future.

Fiona Tan was born in 1966 in Pekanbaru, Indonesia, to a Chinese father and Australian mother. She first lived in Melbourne, Australia. In 1984, she moved to Amsterdam where she continues to live and work. She studied at the Rietveld Academie and the Rijksakademie van Beeldende Kunst in Amsterdam.

In 2002, she was invited to documenta 11 and in 2009, she represented the Netherlands at the Venice Bienale. Her works have been presented in some of the most prestigious galleries and museums. In 2015, she created History’s Future, which was nominated in the Tiger competition at the Rotterdam International Film Festival and in 2016, Ascent won an award at the International Film Festival in Locarno. In 2016-2017, Fiona Tan received a grant for an artist residency at the Getty Center in Los Angeles. She also won the Spectrum International Prize for Photography in Germany for 2019. In the same year, the MACS invited her to take part in a residency, during which she created several works in relation to the Mundaneum, which were subsequently exhibited during her first exhibition in Belgium: L’Archive des ombres. In 2020, the Museum der Moderne Salzburg and the Kunsthalle Krems simultaneously held the exhibition Mit der anderen Hand/With the Other Hand, the first major retrospective of her work.

Daniel Turner was born in 1983 in Portsmouth, Virginia. He graduated with a BFA from the San Francisco Art Institute in 2006 and currently lives and works in New York. Daniel Turner’s work has been shown in national and international exhibitions, including Daniel Turner at the Chinati Foundation, Marfa, 2,220 at Objectif Exhibitions, in Antwerp and Die Kräfte Hinter Den Formen at the Galerie im Taxispalais, Innsbruck. Daniel Turner was also a guest researcher at the University of New York from 2009 to 2010. In 2020, he took part in the group exhibition Les Abeilles de l’Invisible at the MACS.

He was awarded the Pollock-Krasner Foundation prize in 2018 and won the grant prize of the Virginia Museum of Fine Arts from 2004 to 2009. He was a finalist of the Future Art Prize 2019/Victor Pinchuk Foundation and took part in their exhibition in Ukraine and during the Venice Bienale in 2019.
His works are found in the public collections of the Museum of Modern Art of the City of Paris, France; FRAC Bretagne, France; ICA Institute of Contemporary Art Miami, Florida; FRAC Ile-de-France, Paris, France, the San Diego Museum of Art, California and the MACS at Hornu.

Oriol Vilanova was born in 1980 in Manresa, Spain.
He now lives and works in Brussels, where he scours the flea markets in search of postcards.
An extension of performance, documentation and installation, his artistic practice generally takes as a starting point the major collection of postcards (several thousand) which he has built up almost obsessively for the past 15 years.
He has taken part in a number of joint exhibitions in Europe and beyond, including MACBA, Barcelona in 2011, 2013 and 2014; Palais de Tokyo, Paris in 2012 and 2020; LLS Paleis, Antwerp in 2018; Kunstverein Langenhagen (Germany) in 2018; APAP6 Trienal Anyang, Seoul in 2019 and PetahTikva Museum of Art, Tel Aviv in 2019.
He has also had solo exhibitions in a number of institutions: Fundació Joan Miró, Barcelona in 2013; M-Museum in Leuven in 2016; Albright Knox Art Gallery, Buffalo (USA) in 2019 and Entre deux portes, Brussels in 2020.

He has undertaken several residencies and has published a number of artist books, including They Cannot Die in 2012, edited by JRP Ringier, Zurich. 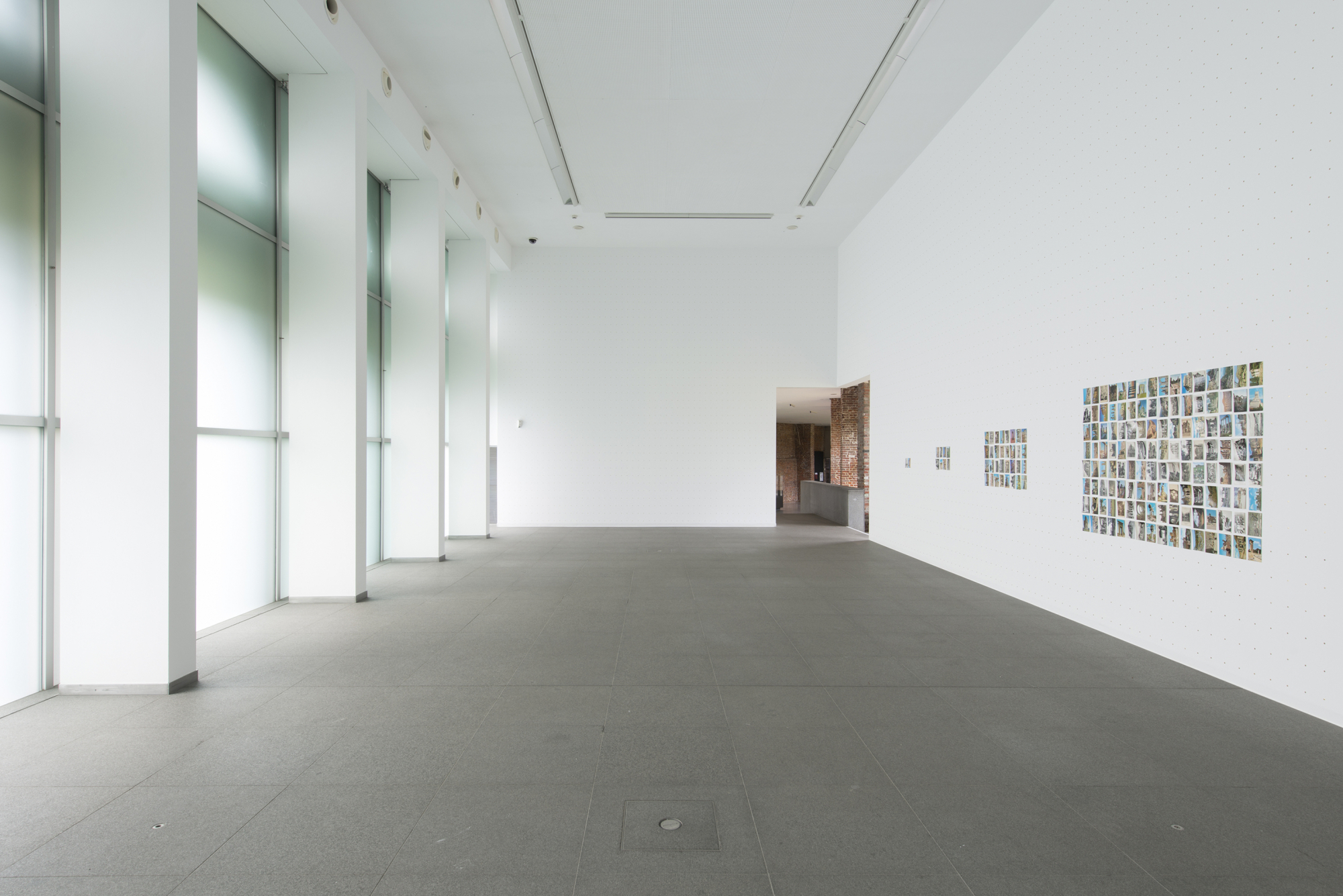 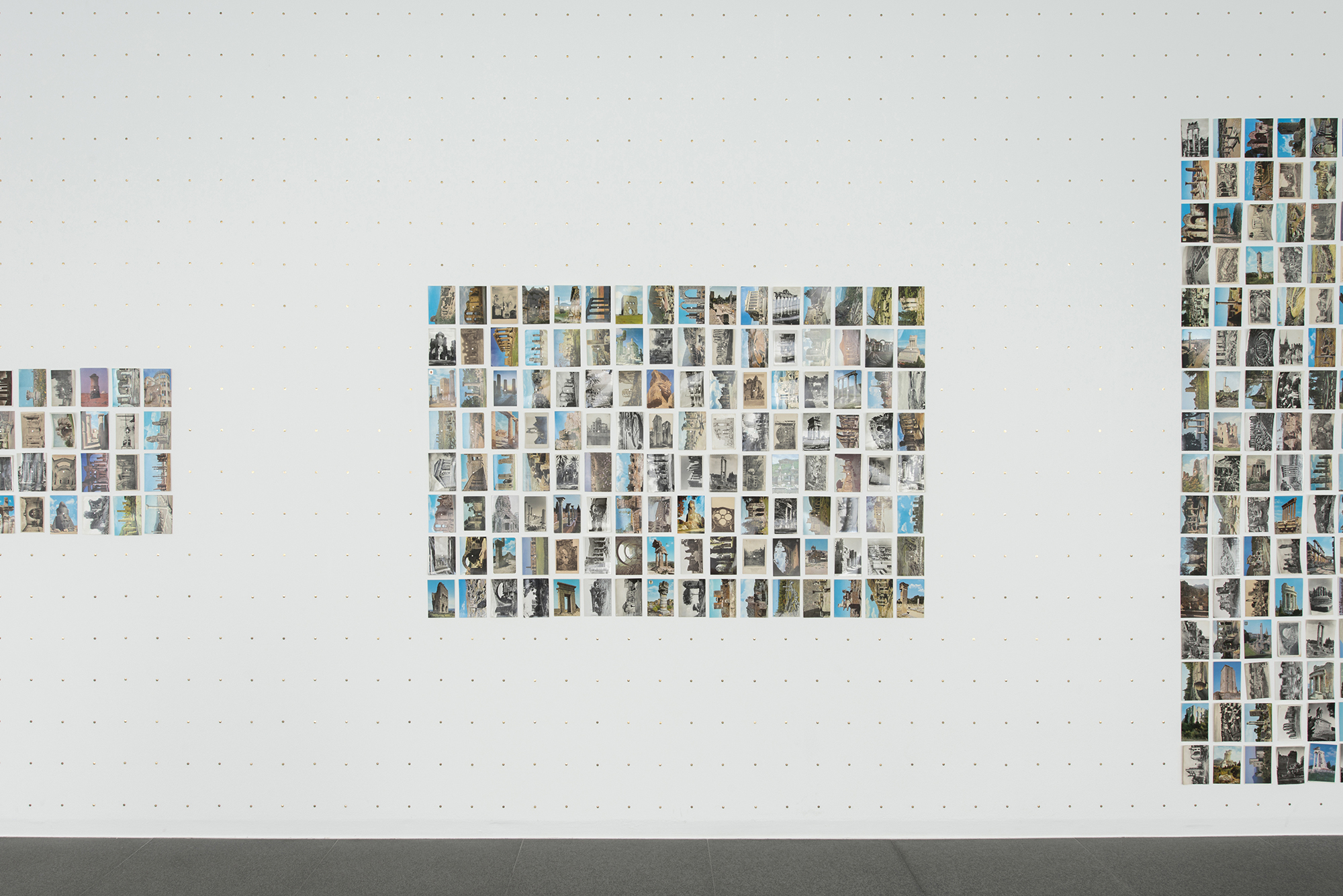 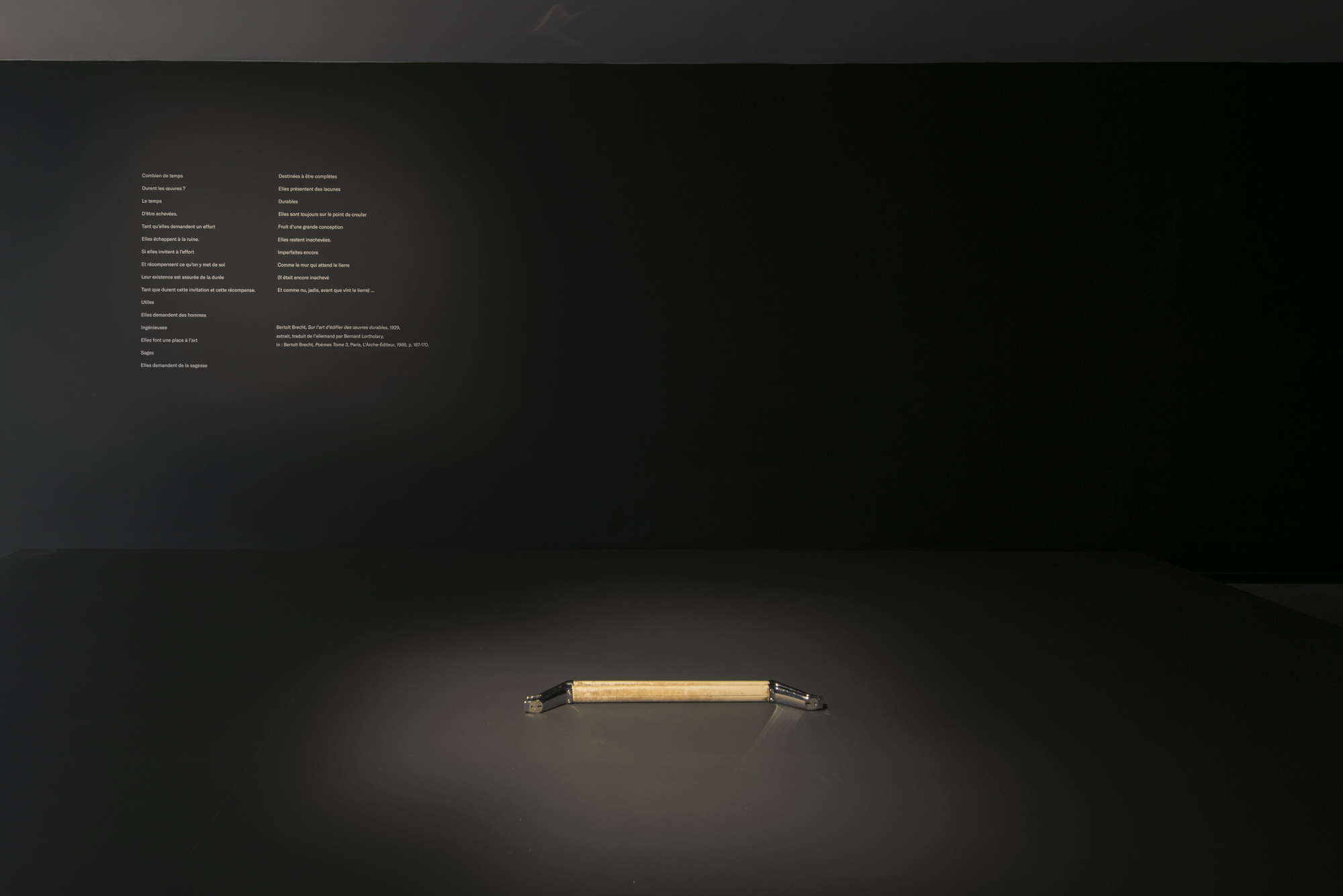 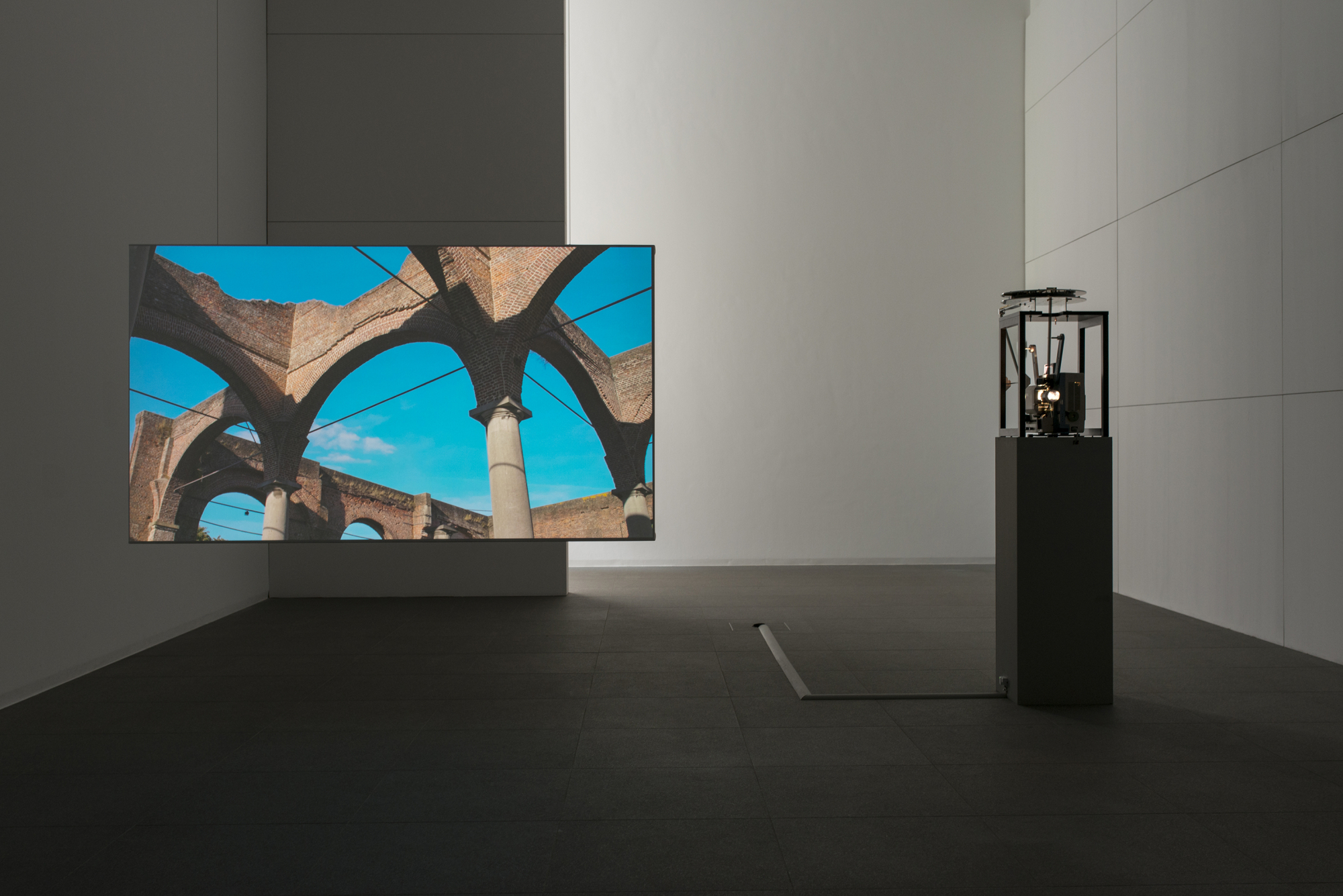 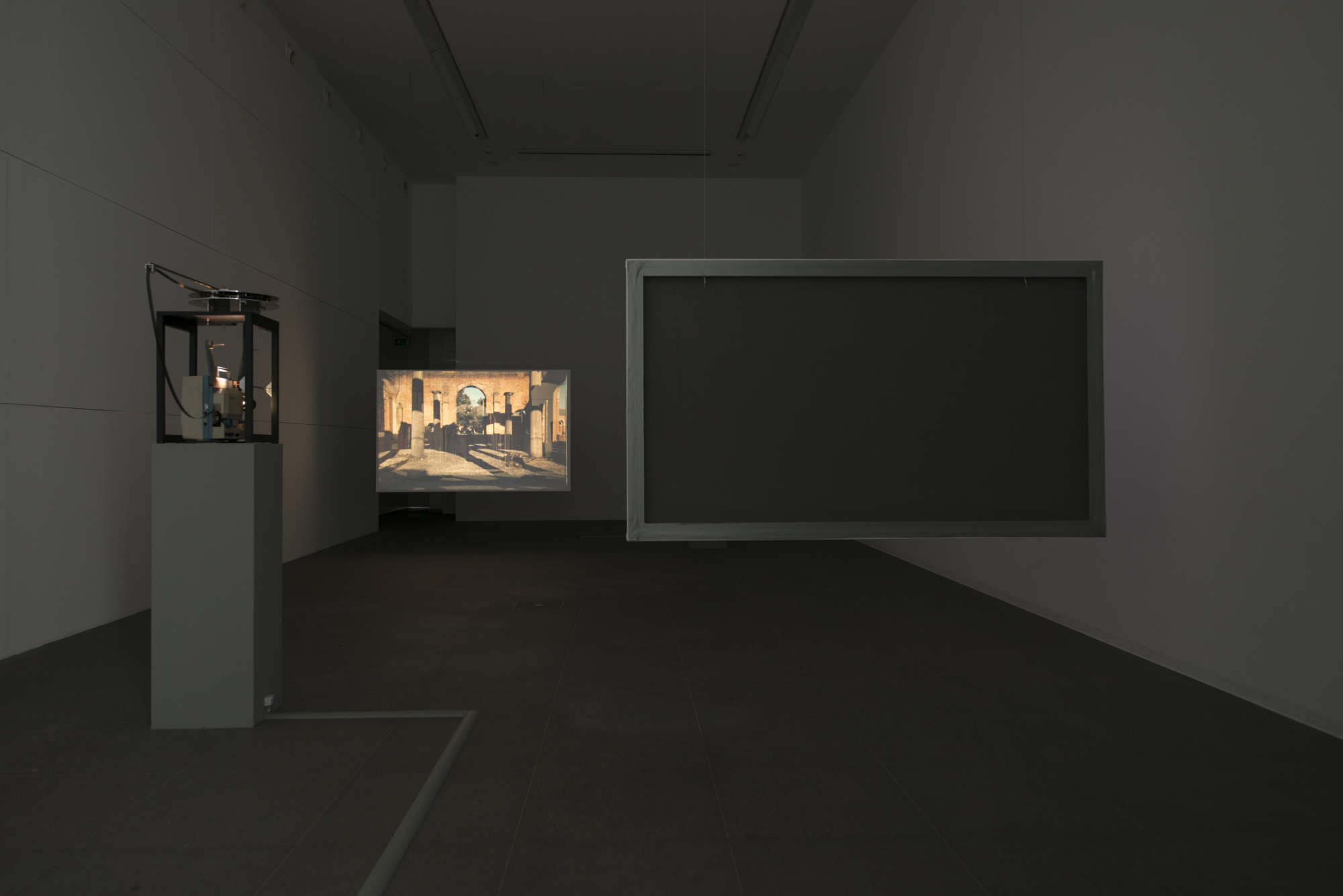 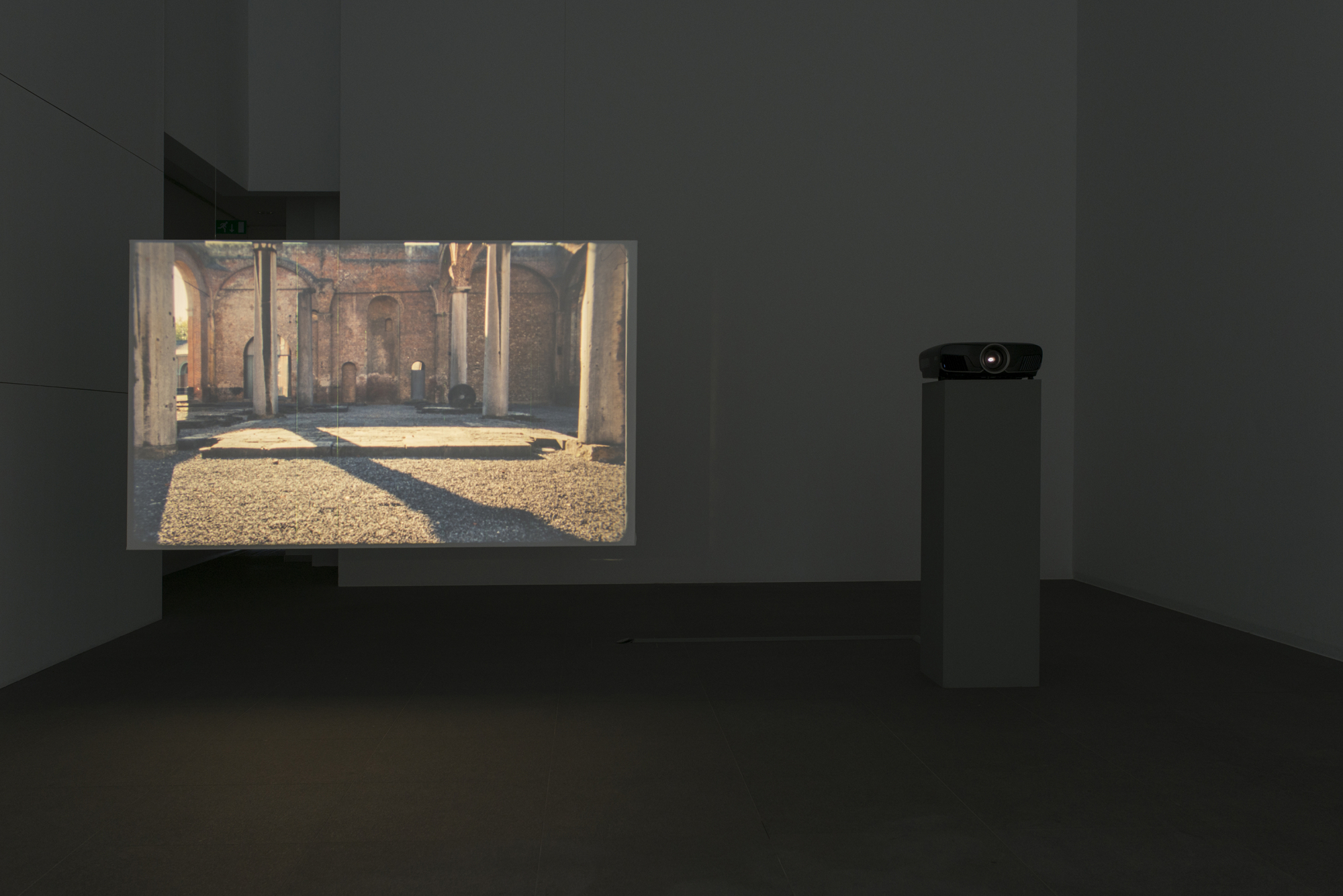 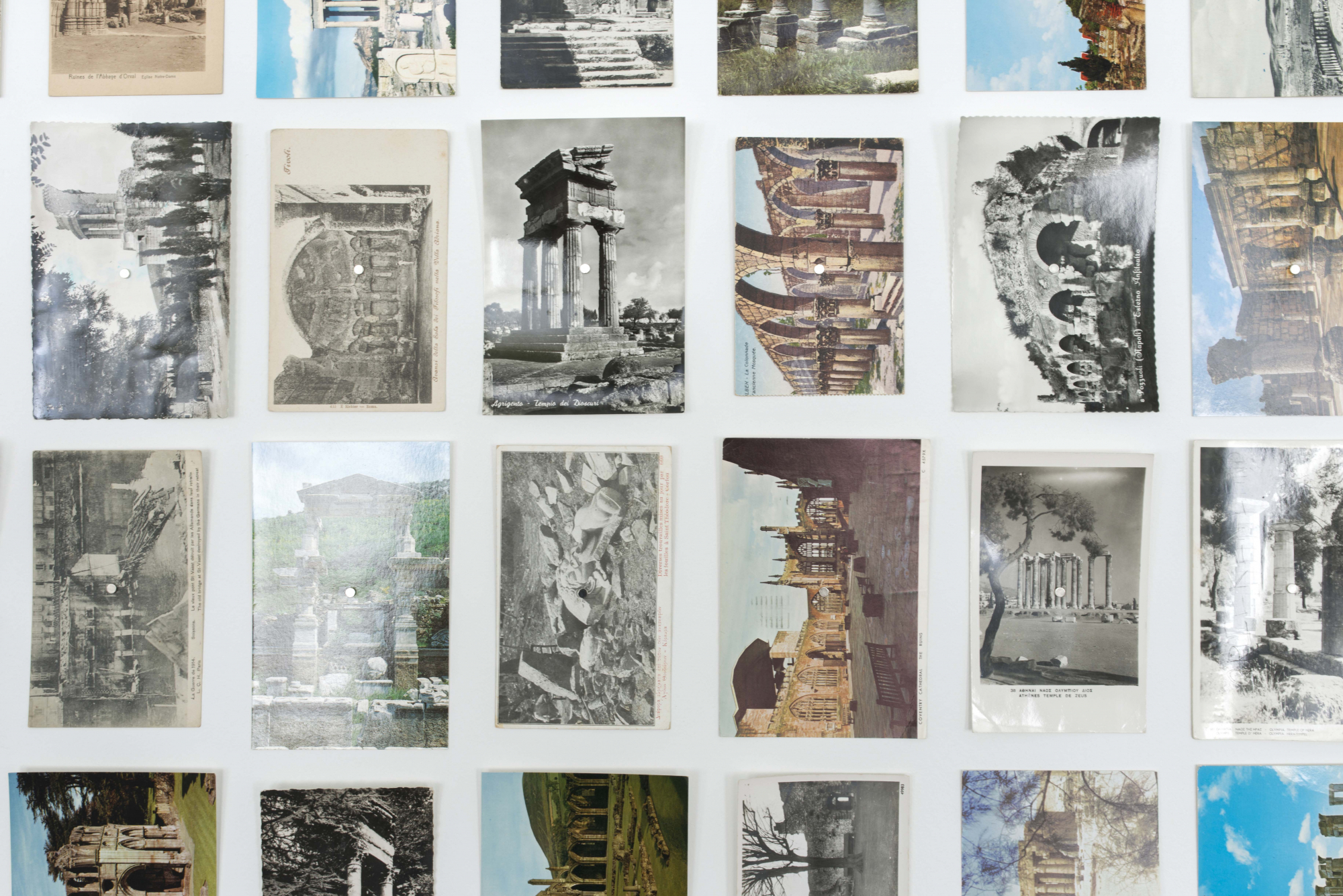 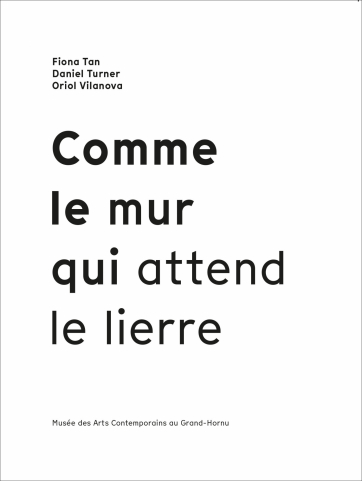