No Room for Regrets
Partner(s) 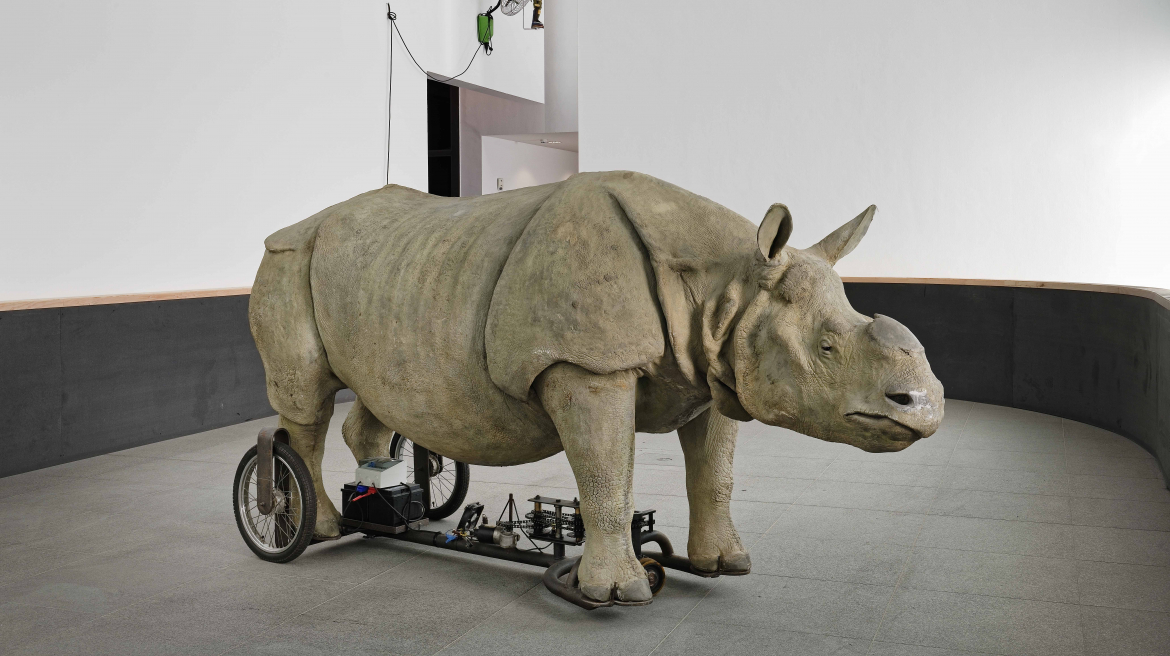 Johan Muyle. No Room for Regrets

The MACS is organising a retrospective exhibition of works by Johan Muyle, one of the major Belgian artists of his generation. From his modest assemblages made with the help of artisans working in the streets of Kinshasa to his customised motorbikes, not forgetting his monumental paintings entrusted to Mumbai poster artists, Johan Muyle’s oeuvre is nurtured by his numerous encounters and collaborations throughout the world. The know-how, beliefs, rituals, imageries and popular stories that he discovers there have fuelled his interest in otherness and his faith in an albeit maltreated humanity. Through motorised assemblages, cryptic aphorisms and performances, Johan Muyle creates enigmatic allegories which cry out to us about the state of the world and its contradictions. Reacting to current events, he seizes upon and thereby diverts minor news items and historic events in order to denounce human vanity, the barbarity of governments, the hypocrisy of religions and the society of the spectacle, but also to point out, as Jean-Luc Godard said, that “civilisation is in peoples”, by celebrating for example the Mothers of the Plaza de Mayo in Argentina or the “Moustache Brothers” in Myanmar, who in his eyes are heroes of revolution and resistance. 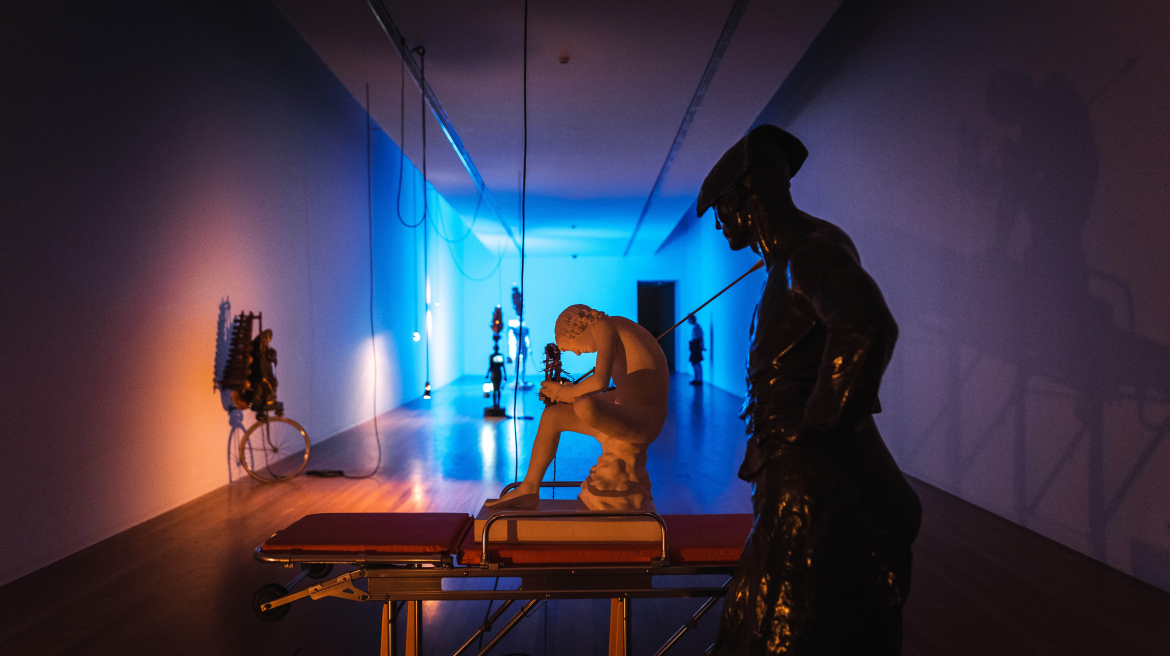 The artist devised the No Room for Regrets exhibition as an immersive, interactive journey through the principal periods of his œuvre.

The imposing installation Rien ne s’y oppose, created in 2010 for Le Creux de l’enfer in Thiers and which is now being presented for the first time in Belgium opens No Room for Regrets by occupying the museum’s entrance hall: here, three mannequins endowed with attributes relating to various adolescent sub-cultures move forwards on rails, symbolising conformism. Also considered by the artist as a reference to Pieter Brueghel’s Parable of the Blind, Rien ne s’y oppose emphasises the relationship between the artist and Belgian art history.

Following on from this introduction, the first two rooms of the museum take us back in time, housing several emblematic pieces from Johan Muyle’s oeuvre, including Les Reines mortes (1988), L’Impossibilité de régner (1991) and Angel et Angelo (1992). 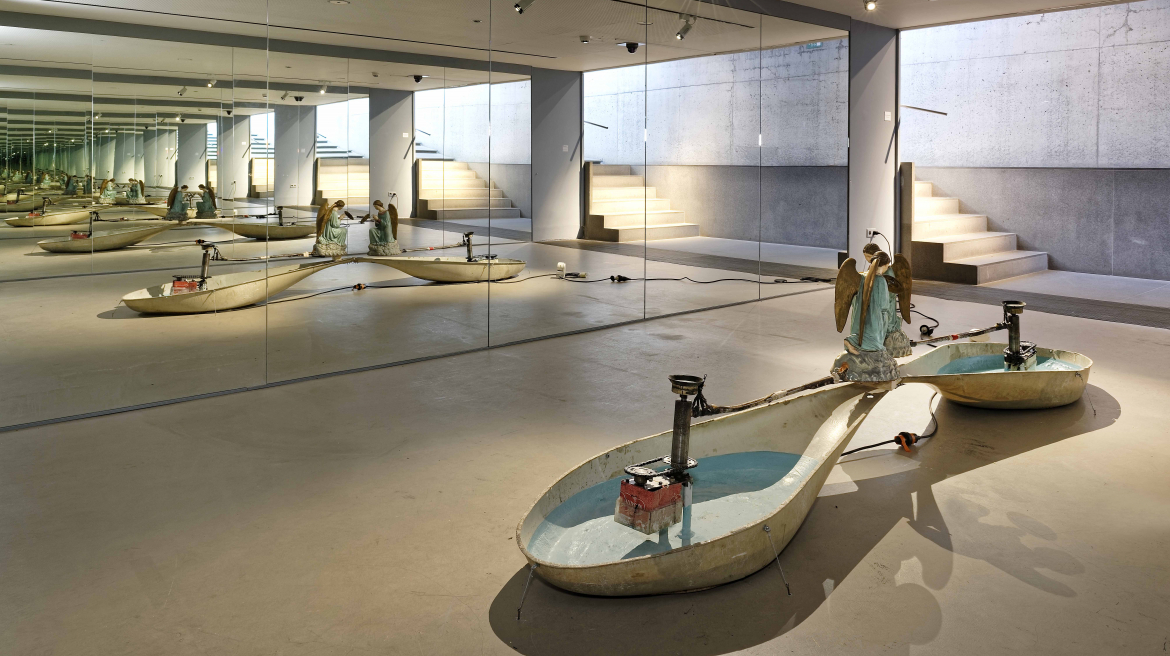 The artist also makes the most of the specific nature of the site to establish an interaction with the contemporary architecture of the museum space, but also with the Grand-Hornu site’s neoclassical architecture. Ne rien dire, ne rien voir, ne rien entendre (1999) or No More Heroes (2011), placed outside, particularly resonate with the industrial site, whilst the MACS bridge room (over 40 metres long) takes the form of a sculpture gallery, instilling a surprising dialogue between Le Marteleur, an emblematic work by Constantin Meunier, and the assemblage sculptures which Johan Muyle created using plaster moulds, such as De Spinario - Le Tireur d’épine (2017).

To round off the exhibition, Johan Muyle chose to enlarge the work Singin’ in the Rain (2008) to the scale of the final museum room and to accentuate its spectacular aspect to make a monumental installation combining assemblage sculpture and cinematographic staging.

The artist will give two performances during the preview. The first is a tableau vivant which is perceptibly reminiscent of L’Amie du magicien (1989). The second incorporates an evocation of the current health crisis that has come about with the emergence of the Covid-19 virus.

They will be filmed and screened throughout the duration of the exhibition. 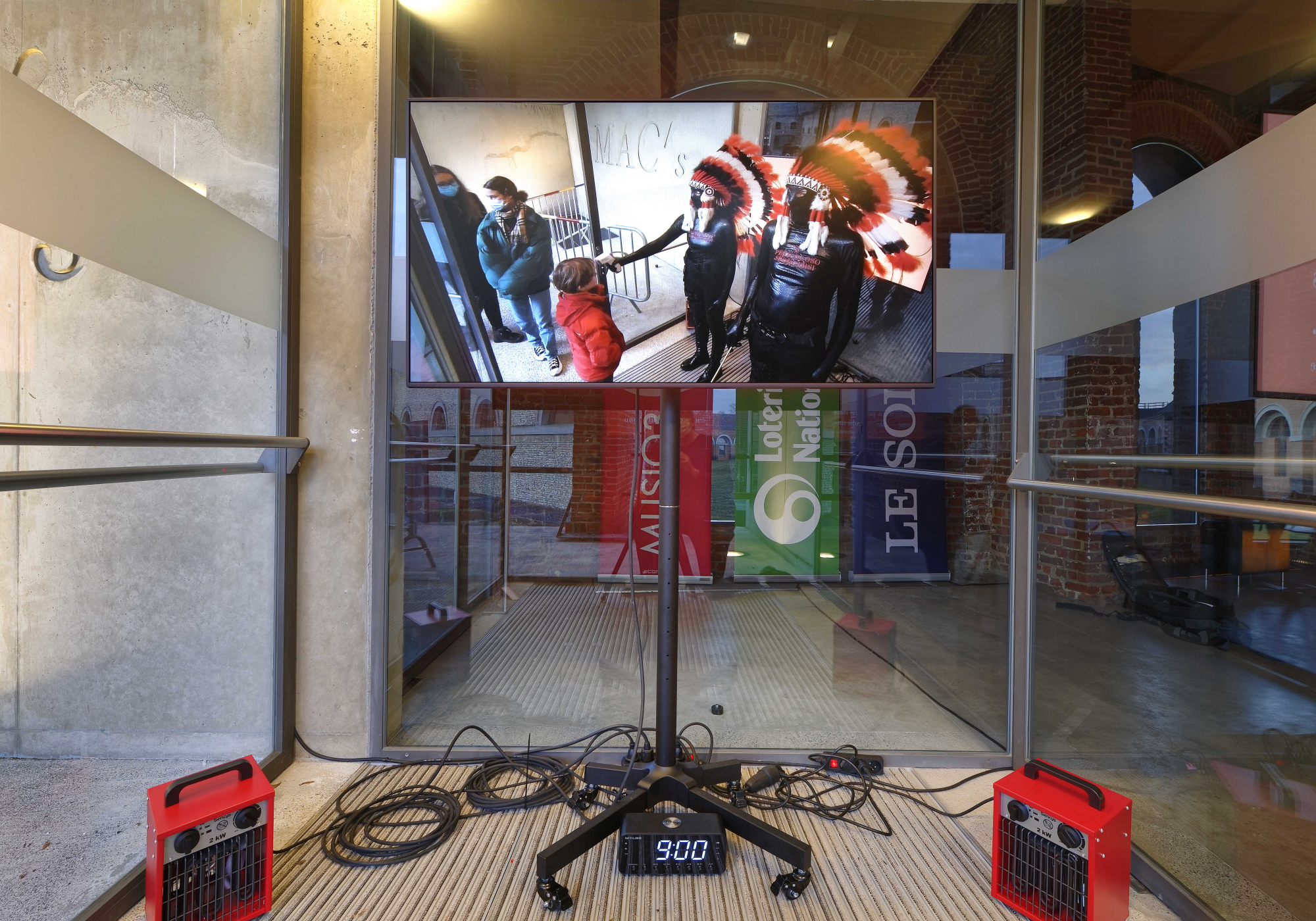 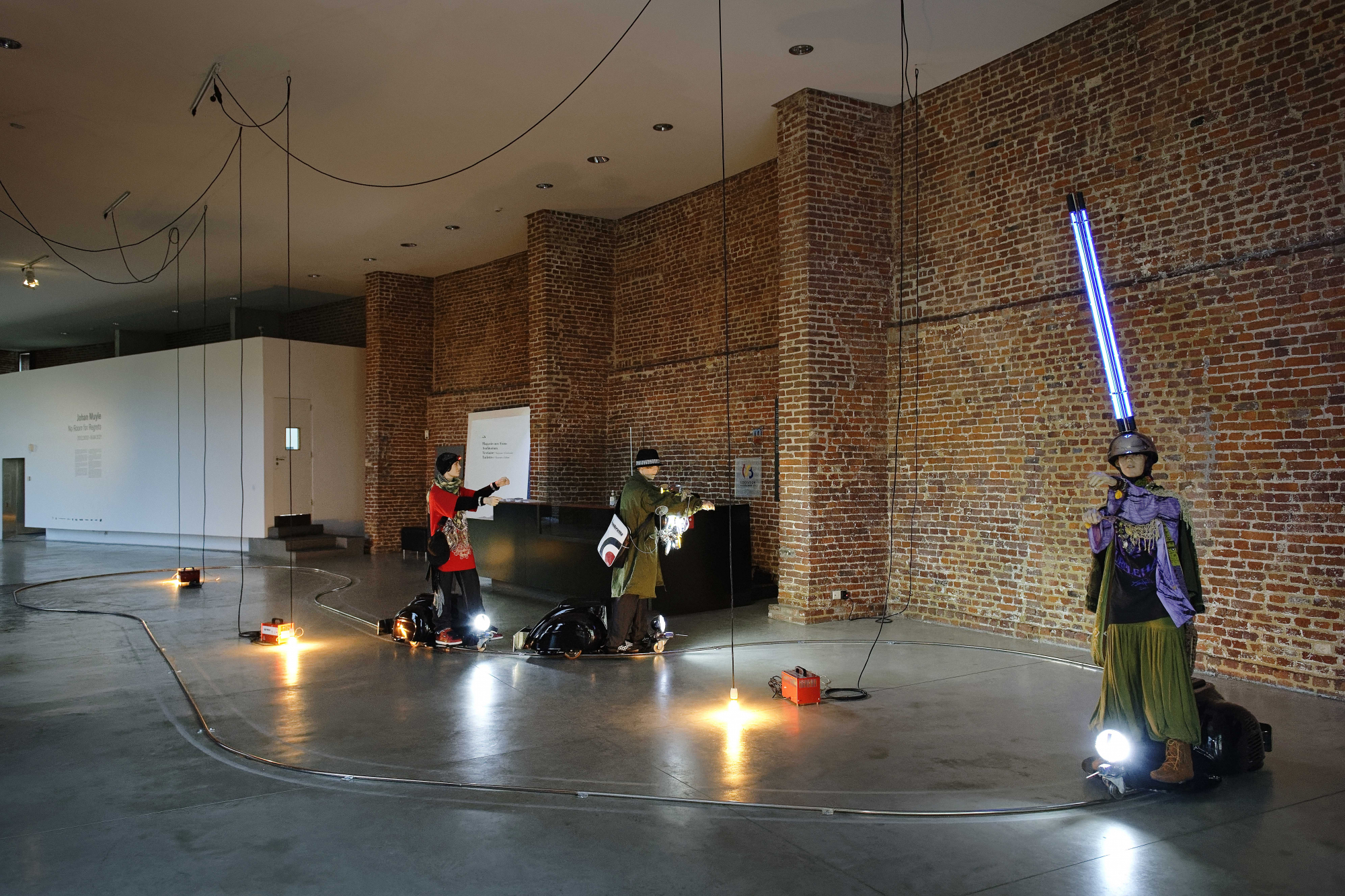 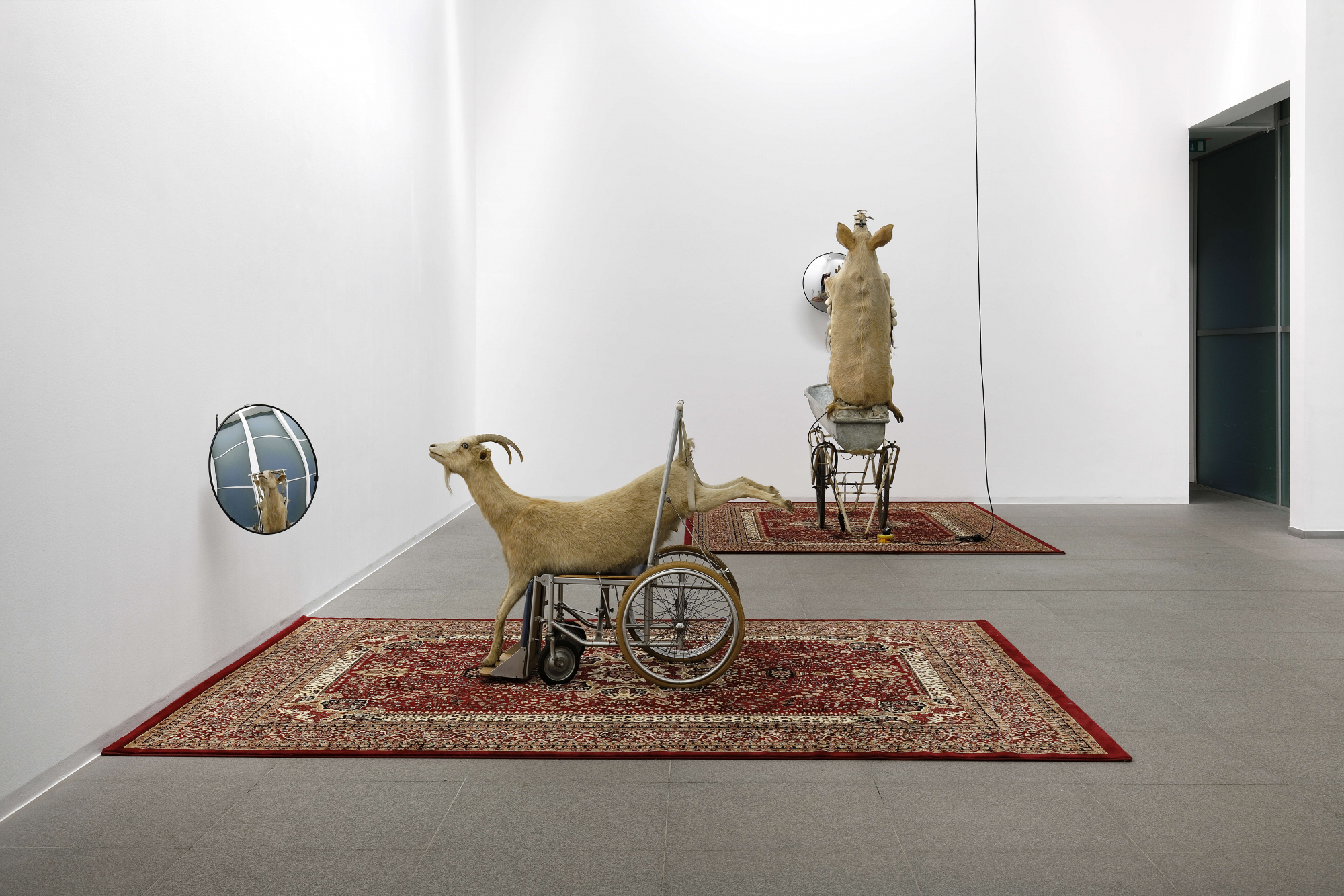 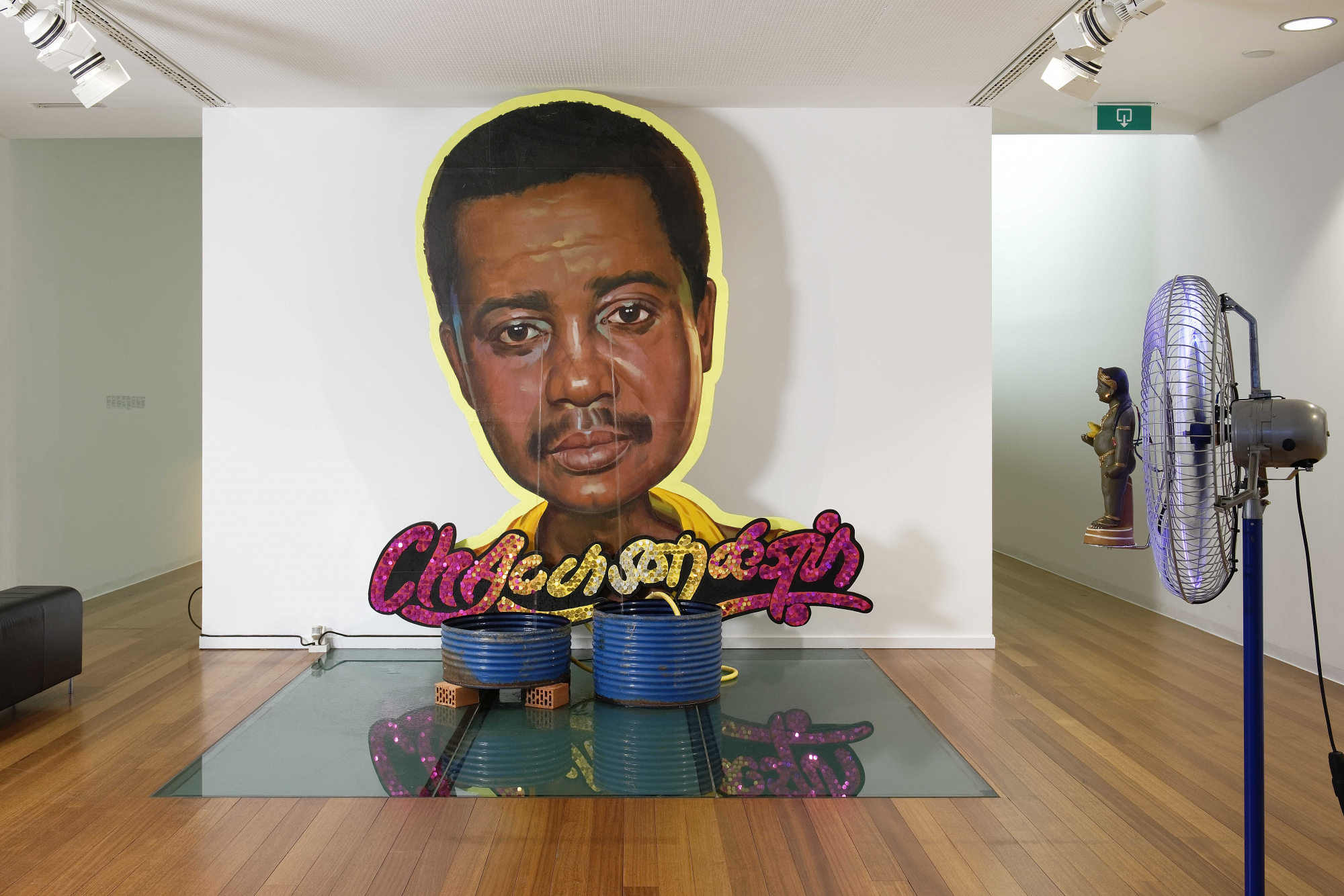 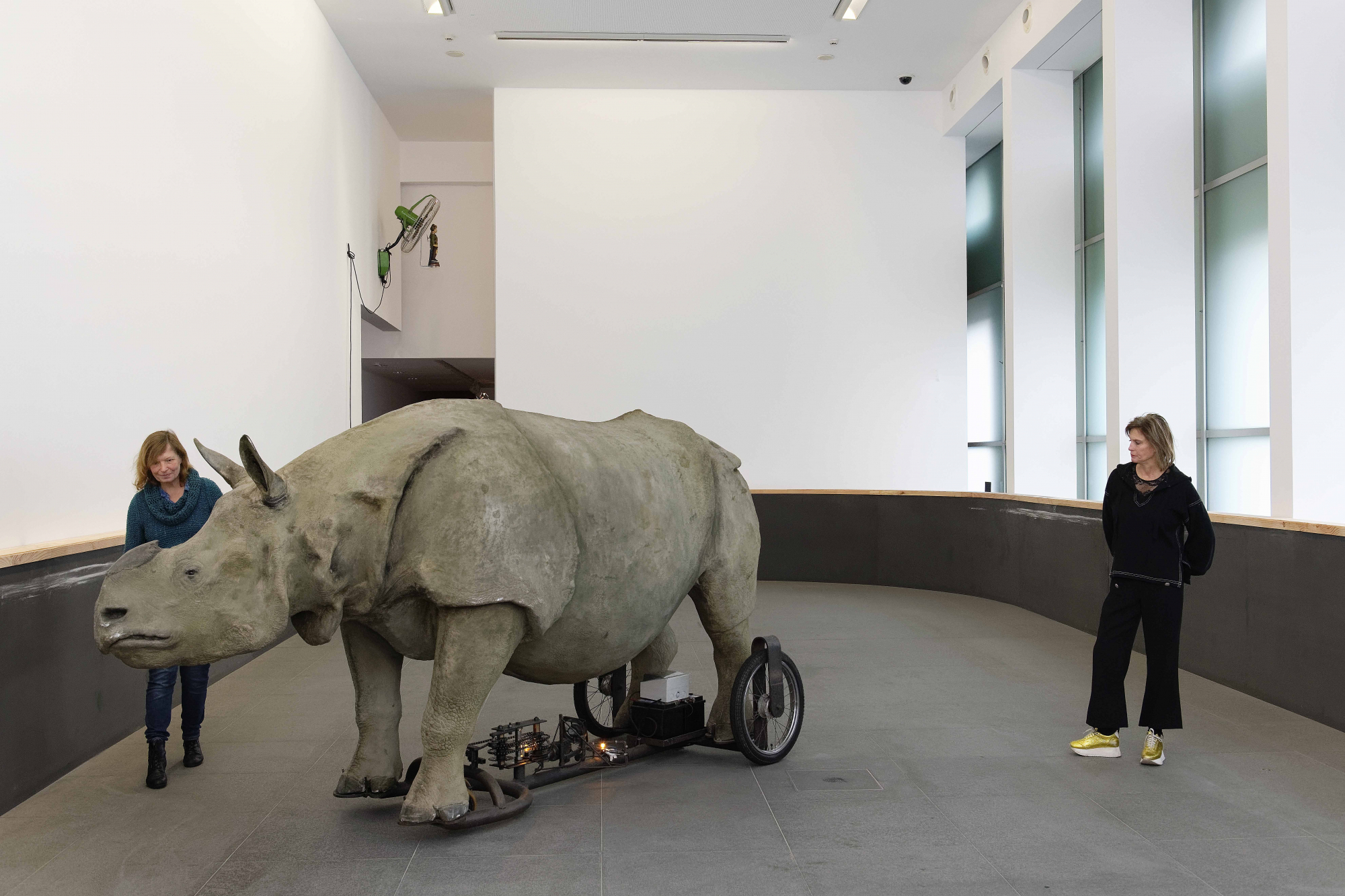 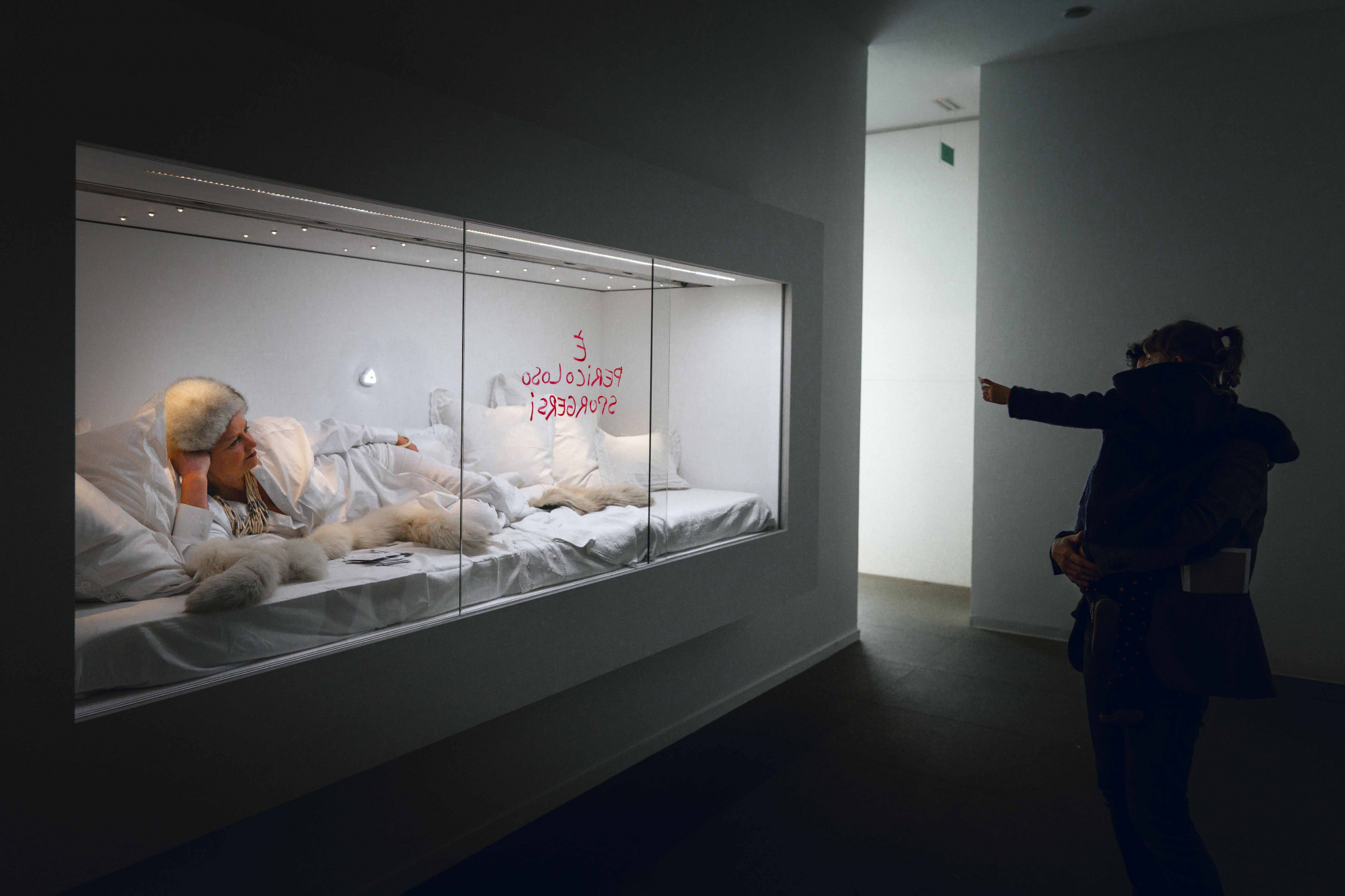 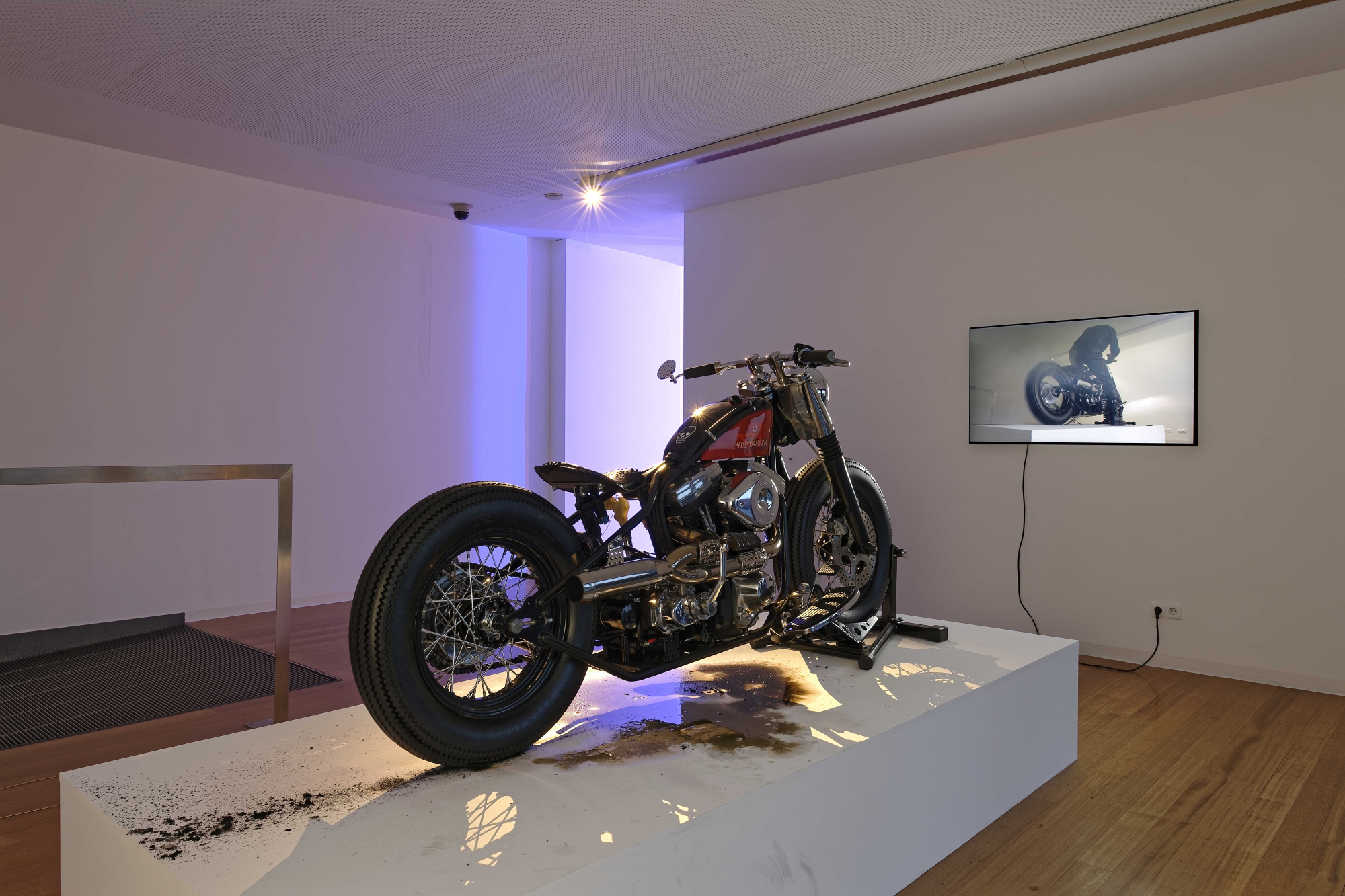 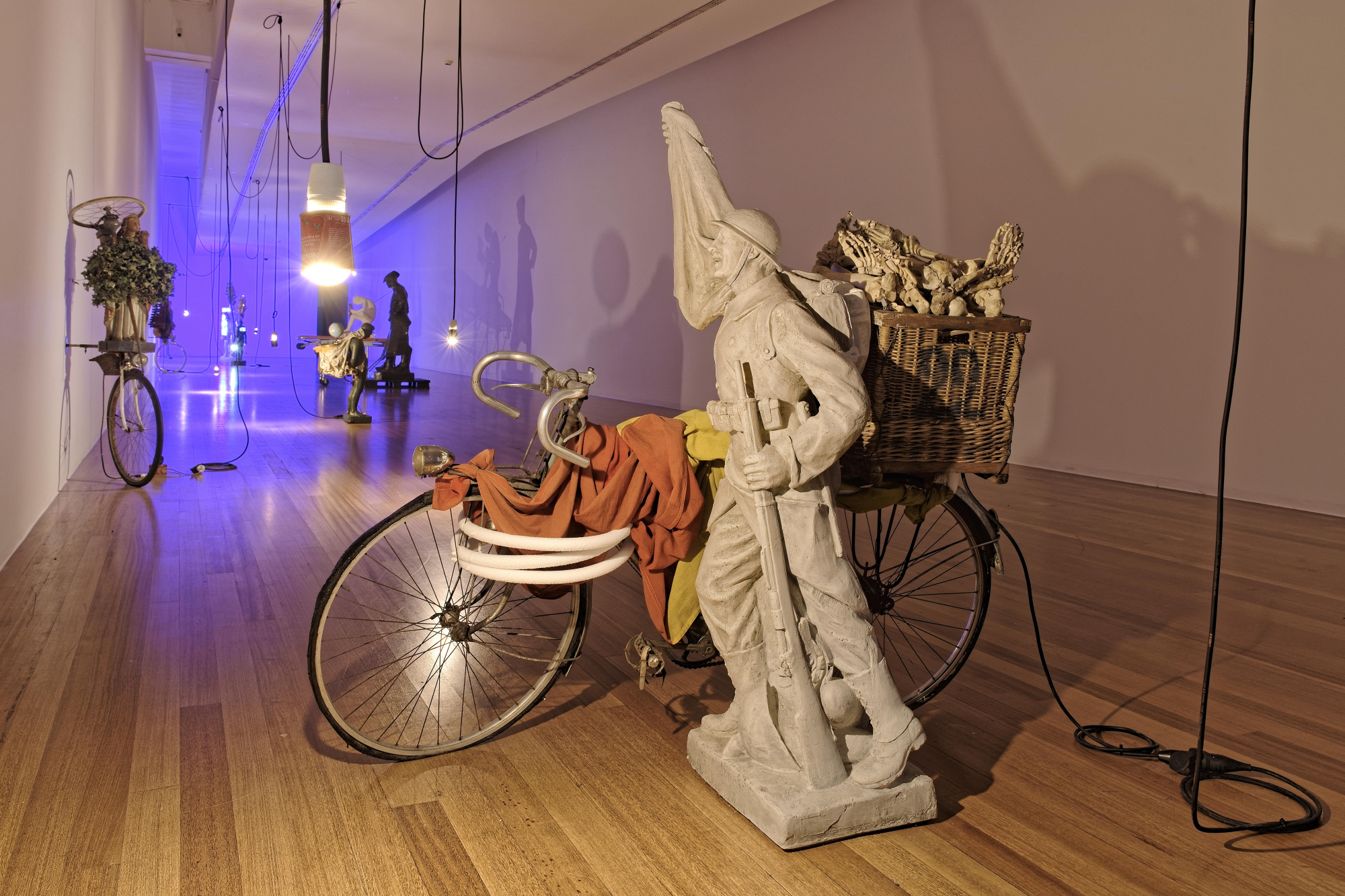 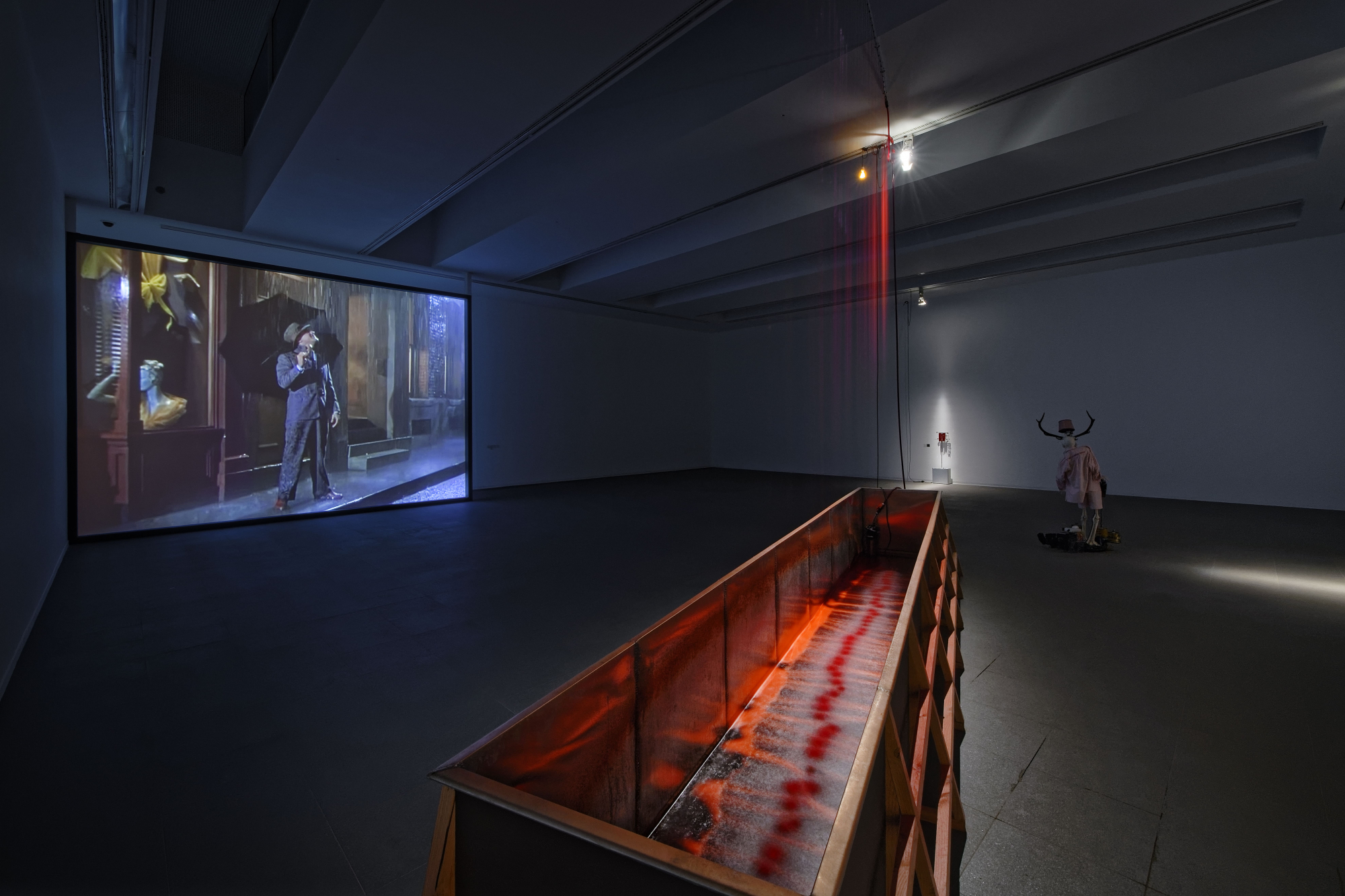 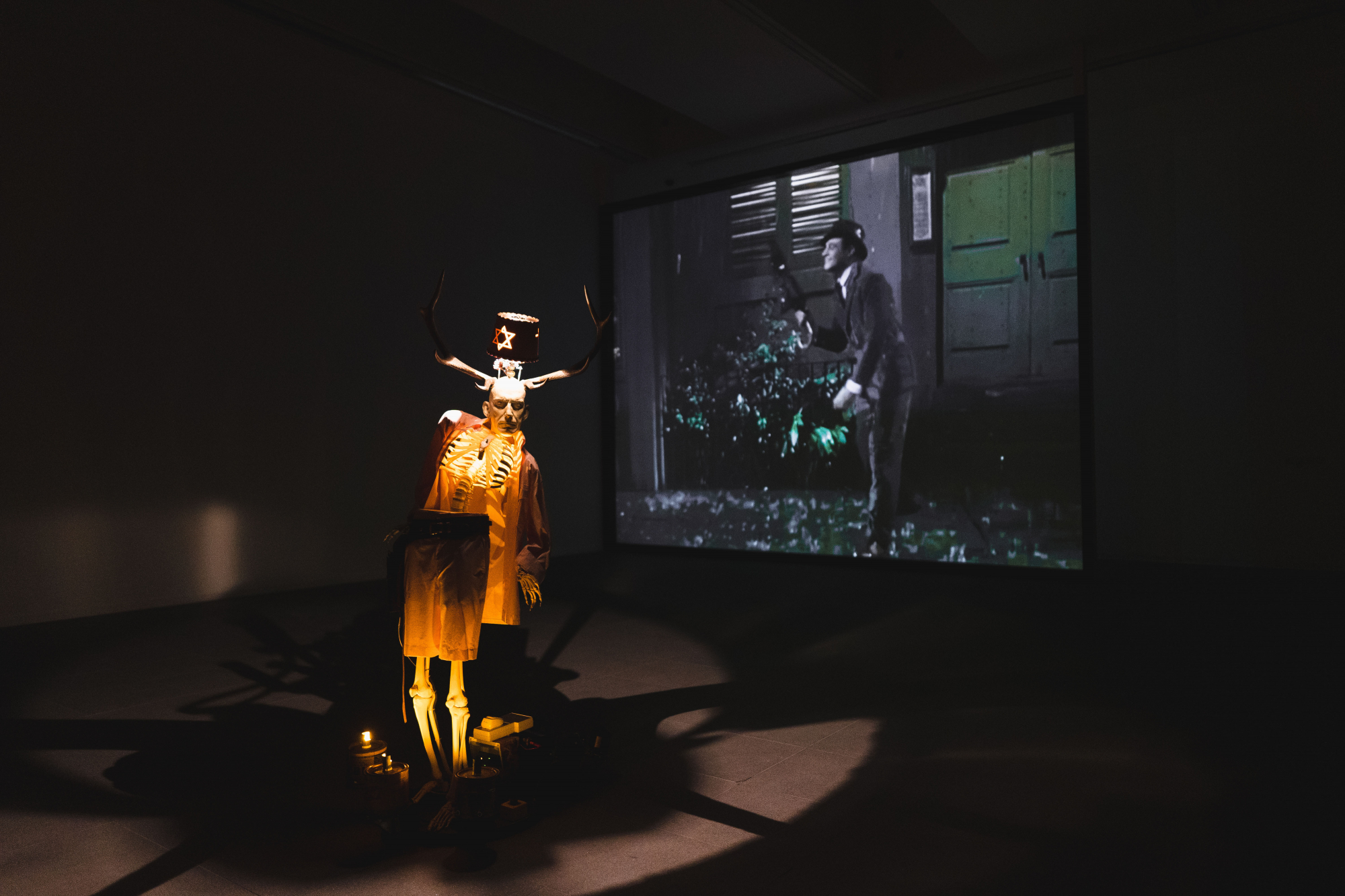 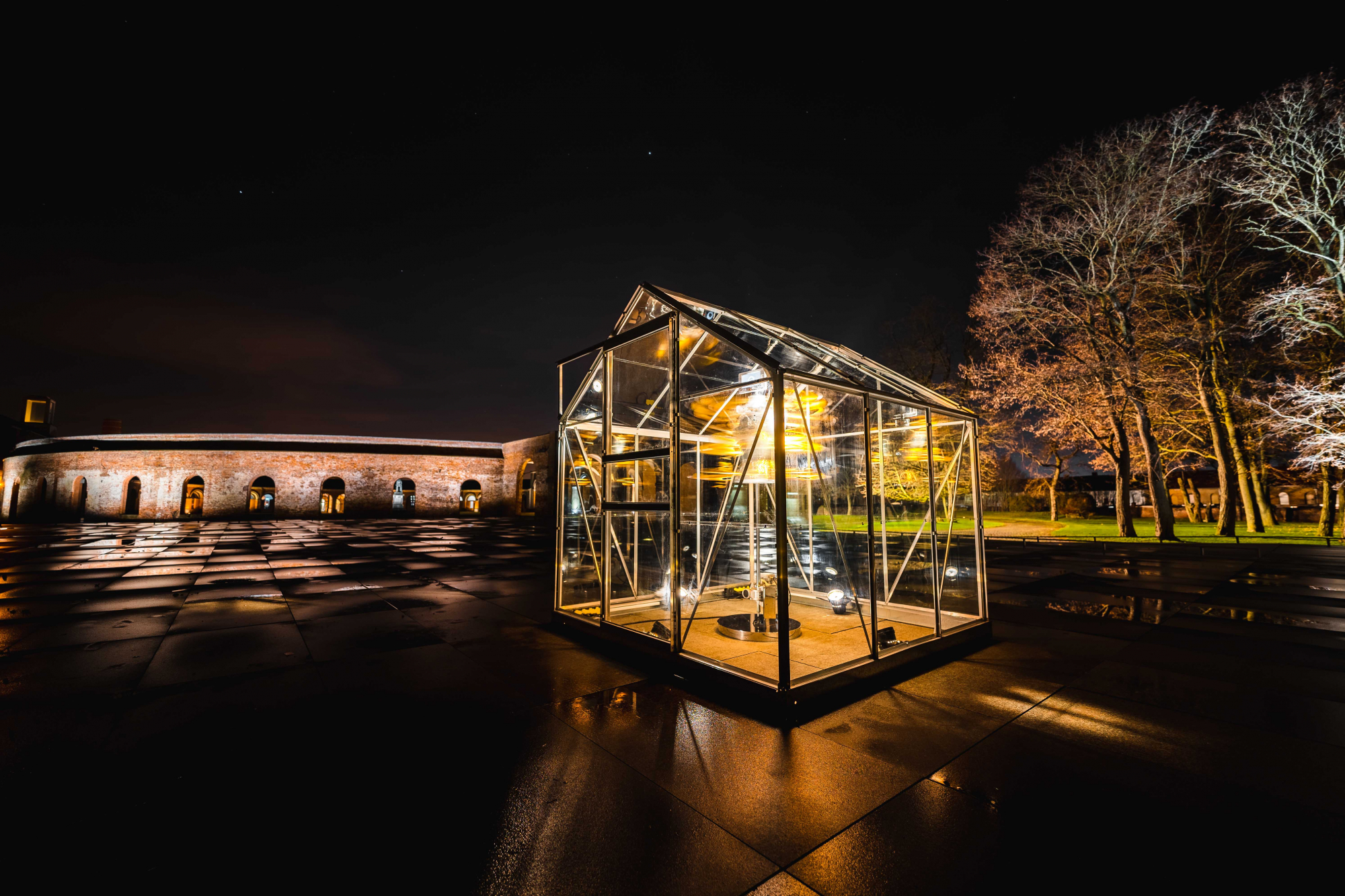 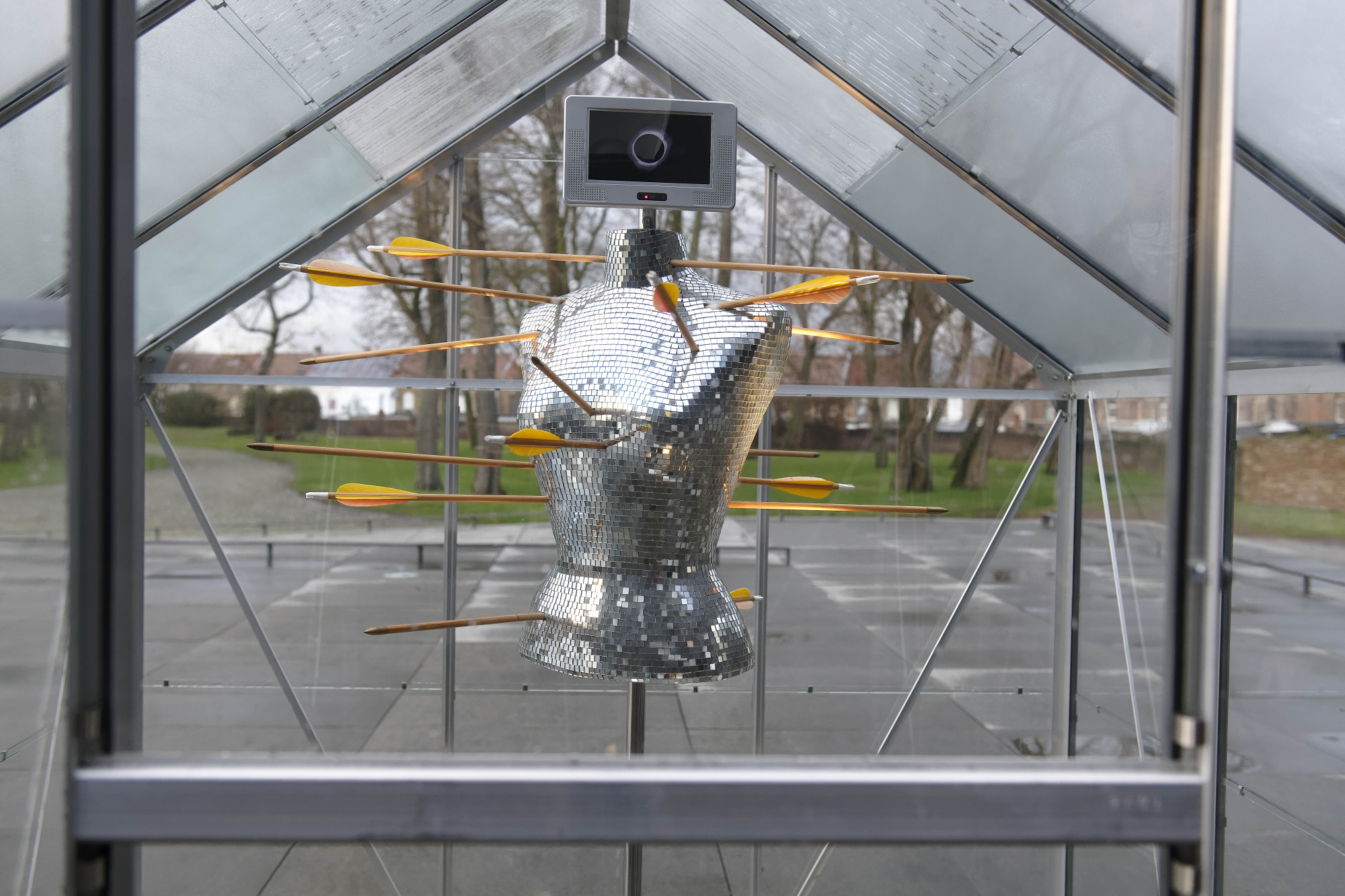 Born in Charleroi in 1956, Johan Muyle lives and works in Liège and Brussels. His works are found in public and private collections in Europe and North America. He has also taken part in international contemporary art fairs and biennales (São Paulo in 1998 and Milan in 2001, Poznan in 2010 and Szczecin in 2012). His many travels influence his assemblage sculptural practice and result in collaborations (Chéri Samba and Bombay poster artists). The singular nature of Johan Muyle’s oeuvre—combining carnavalesque vanities and humanism—make him an heir to the Belgian artistic tradition and one of its most representative actors on the international contemporary art scene, as witnessed notably by his presence in the La Belgique visionnaire exhibition at the Palais des Beaux-Arts in Brussels in 2005. Since 2007, Johan Muyle has been head of the sculpture department at the École nationale supérieure des Arts visuels de la Cambre in Brussels. 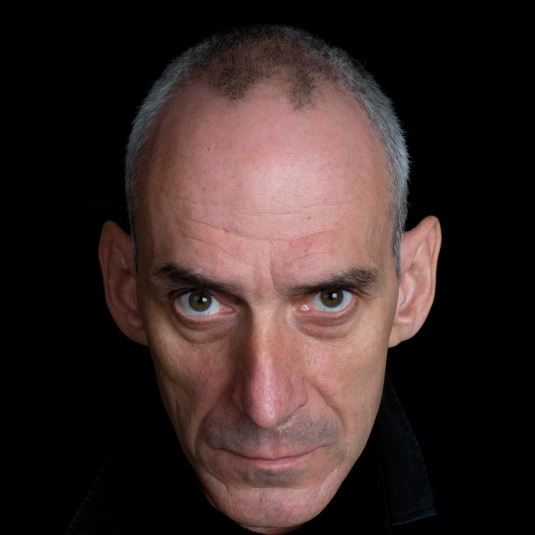