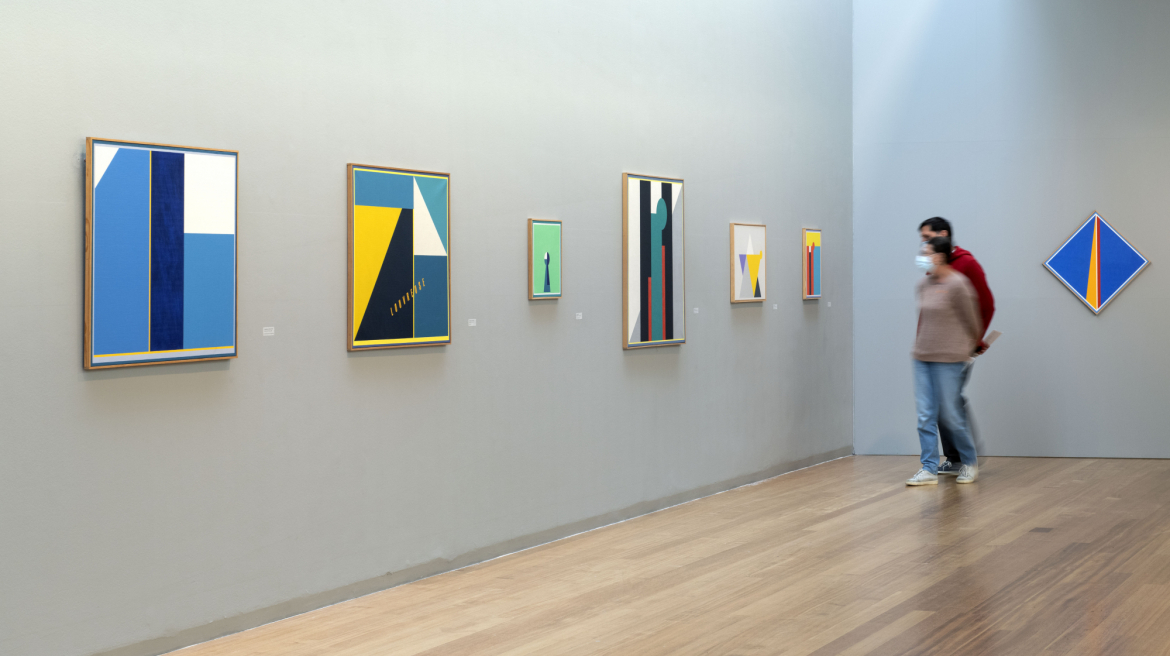 Assiduously developing—not without a few touches of humour—a so-called “geometric” abstract art (to distinguish it from its lyrical extreme), since the mid-1960s the Liège painter Léon Wuidar has produced a body of work that is both coherent and surprising in equal measure. After the Museum Haus Konstruktiv in Zurich, the MACS is dedicating a major retrospective to the artist’s work, bringing together for the first time in a museum in Belgium a vast collection of paintings, collages and sketchbooks. Through a selection of works produced between 1962 and today, À perte de vue highlights the constant evolution of an artist who has gradually established himself, on the fringes of artistic trends or schools, as one of the most free and delicate artists of his generation.

Born in Liège in 1938, Léon Wuidar began as a self-taught painter in 1955, seeking his way among the multiple paths that figurative painting still offered at that time. After a period of research in all directions to find his artistic identity, he abandoned figuration in 1963 in favour of abstraction, perfectly aware that he did not belong to the generation of its pioneers, but determined to continue its adventure and above all to perfect its aesthetics. Historically, his work is thus set apart by the meticulous detail that he adds to the relatively “elementary” style of the paintings in this register, which was revealed to him by the reproductions of two paintings by Ben Nicholson that he discovered in a magazine while searching through the cart of a second-hand bookseller. When some fifteen years later, he began such paintings as À perte de vue (1968) in the same “neo-plastic” style, Léon Wuidar aimed to make them evolve towards a ‘smooth, clear’ painting, in which the color radiates, inhabited by a certain “voluptuousness”. As he confided to Ben Durant: “Being an attentive gallery visitor, I contemplated these abstract paintings with a recurrent reflection: what I am looking at has a primitive quality, in its spontaneity, the simplicity of the means and in the best examples, the freshness of the colours. I imagined an evolution in abstract painting: the creation of a more profound, balanced body of work, which could be defined as classical art. Of course, I had in mind the evolution of Greek art; we clearly see the changes from the Archaic Kouros and Core, to the balance of the 4th century period.”

The painting Anamorphose (1968), which represents a character in front of a distorting mirror, appears in historical hindsight as the emblem of this passage towards abstraction through a pictorial frame, where the classical, linear perspective is no longer required. Departing from modernist dogma and its cold objectivity, Léon Wuidar thus brought a personal touch to his first geometric compositions in which humour, cultural references, ornamental motifs and even ambiguous signs emerge. Simple in structure yet complex in their maze, his compositions invite the viewer to explore a network of signs that they have to “learn to interpret”, in the same way that the pictorial language of rebuses and ideograms is deciphered. This interest in coded or even encrypted images is evident on reading his sketchbooks, where ingenious graphic discoveries are reflected in his research into ornamental patterns, typographies, pictograms and calligrams. Without speaking of esotericism, it should nevertheless be emphasized that the semantic pleasure generally found in Léon Wuidar’s iconic language is not far removed from the practice of blazoning in Medieval heraldry. As in the allegories of olden times, these assemblages of signs present themselves to us as a kind of figurative writing that we could easily qualify as postmodern. In the paintings where glyphs and cartouches appear as the remains of ancient, notably Egyptian or pre-Columbian civilisations, the brushstrokes clearly form a primitive, inextricable union between drawing and writing, engraving and architecture, the image and the word. 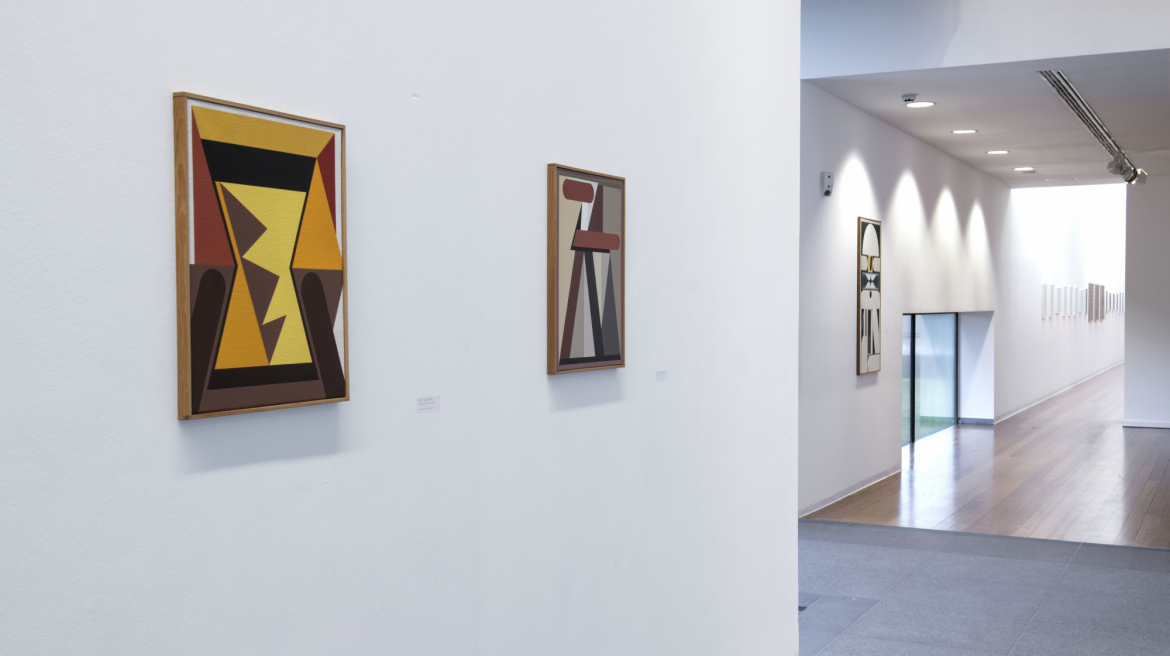 A drawing teacher since 1959, Léon Wuidar began teaching graphic arts at the Académie des Beaux-Arts in Liège from the mid-1970s, alongside Jacques Charlier. At this time, when he also asked his friend the architect Charles Vandenhove to design his house in Esneux, the construction of his paintings became increasingly assertive, through the development of an architectonic language based on a series of signs which the painter used regularly, such as the ornamental herringbone pattern or the elliptical rectangle reminiscent of the cartouche in which the Egyptians inscribed their hieroglyphics. At the crossroads of architecture and writing, this aesthetic of the glyph—or the chiseled line—also dominated the first integration that the artist created in 1977 on the facade of the Sart Tilman university restaurant in Liège. This time in the form of vertical compositions, the sequential arrangement of signs still appears in a series of wooden bas-reliefs that Léon Wuidar created in 1985, echoing the lead types formerly used by printers. Wuidar’s taste for the book professions is also found in the many bindings and boxes that he began to produce at the same time. Resulting from a close collaboration with artisans, this work sometimes led to the use of surprising, sensual materials such as vegetable ivory, ebony or celluloid. In this same precious vein, the artist also produced several book-objects which still bear witness to a certain baroque taste for paper folding.

Developing his own form of “concrete poetry”, Wuidar constructed some of his paintings in the mid-1980s from combinations not only of lines and colours, but also letters and even words. figures also secreted themselves in several compositions, thereby disrupting the dogma of a geometric abstraction to which the painter never fully adhered. Through an effort of imagination and playful suggestion, we can thus recognise in many of his paintings, which at first sight seem to lack any figuration, the signs of concrete things: the top of a fir tree, a clown’s nose, the letters of a word. For other compositions, the abstraction is solely the stylisation of the motif which, reduced to a pictogram, remains clearly identifiable: a mask, a keyhole, a pipe, a chair or a brasserie table. For still others, the visual references, some of which are taken from art history, such as Edward Hopper’s New York Movie, found in Louvreuse, need to be clearly stated in order to find them. In this spirit between abstraction and surrealism, Léon Wuidar also paid homage to René Magritte with a nod to his famous “pipe” (La Trahison des images, 1928-1929).

Pen and ink occupy an important place in the composition processes, integration projects and multiple graphic works that Léon Wuidar executed with remarkable precision. The demanding technique of free-hand drawing seen in his early work was abandoned around 1990 to make way for works which, in addition to drawing, included collages of found elements, in particular postcards and marbled papers, (created using a marbling tank). For decades, Léon Wuidar has accumulated projects, notes and graphic research in his sketchbooks, which are always in small formats and whose diversity in no way detracts from their aesthetic coherence. Throughout the pages, the multiple facets of his oeuvre succeed one another and combine like a stamp collection, revealed in all of its curiosity: advertisements, ornamental motifs, typography, bookbindings, word and card games, as well as compositions for potential paintings… to be made one day. They illustrate an extensive graphic research combined in a visual alphabet of these decorative motifs, sometimes even associated with naturalistic elements: the star, snow, lightning, fire, the heart, the Moon or even the eye. This way of envisioning drawing as an entirely emblematic representation of the world also connects his approach to that of another painter from Liège: Marcel Lempereur-Haut. An abstract painter from the outset, this discreet artist began producing his geometric oeuvre in the 1920s. Lempereur-Haut’s delicate interplay of polygons and fractals could be likened to the fascinating forms seen in beehives or snowflakes. Anchored in his desire to pursue the adventure of modern art whilst also distancing himself from it with modesty and humour, Léon Wuidar thus accepted that a work by this “first Walloon abstract” painter be presented alongside his own work.

Léon Wuidar has exhibited his works regularly throughout his career. Over the past decade, his presence on the artistic scene has taken an increasingly international turn, as witnessed by his personal exhibitions in Bonn (2007), Lille (2009), London (2018) and Zurich (2020). In addition, his work is also found in many public collections in Belgium (Museum of Fine Arts, Brussels; Albertine Library, Brussels; Museum of Walloon Art, Liège; Cabinet des Estampes, Liège; Sart Tilman Open-air Museum, Liège; Center for Engraving and the Printed Image, La Louvière; Fondation Meeùs, Louvain-la-Neuve; Musée de Mariemont, Morlanwelz and the Museum of Fine Arts, Verviers) and beyond (Fernmeldetechnisches Zentralamt, Darmstadt, Germany; Dorstener Maschinenfabrik, Dorsten, Germany and the IDAC Foundation, Mondriaanhuis, Amersfoort, The Netherlands). The exhibition À Perte de vue now being organized by the MACS is the first retrospective exhibition devoted to Léon Wuidar by a museum institution in Belgium. On this occasion, a bilingual catalogue (FR / EN) containing most of the works exhibited as well as a conversation between Léon Wuidar and Hans Ulrich Obrist has been published by the MACS. 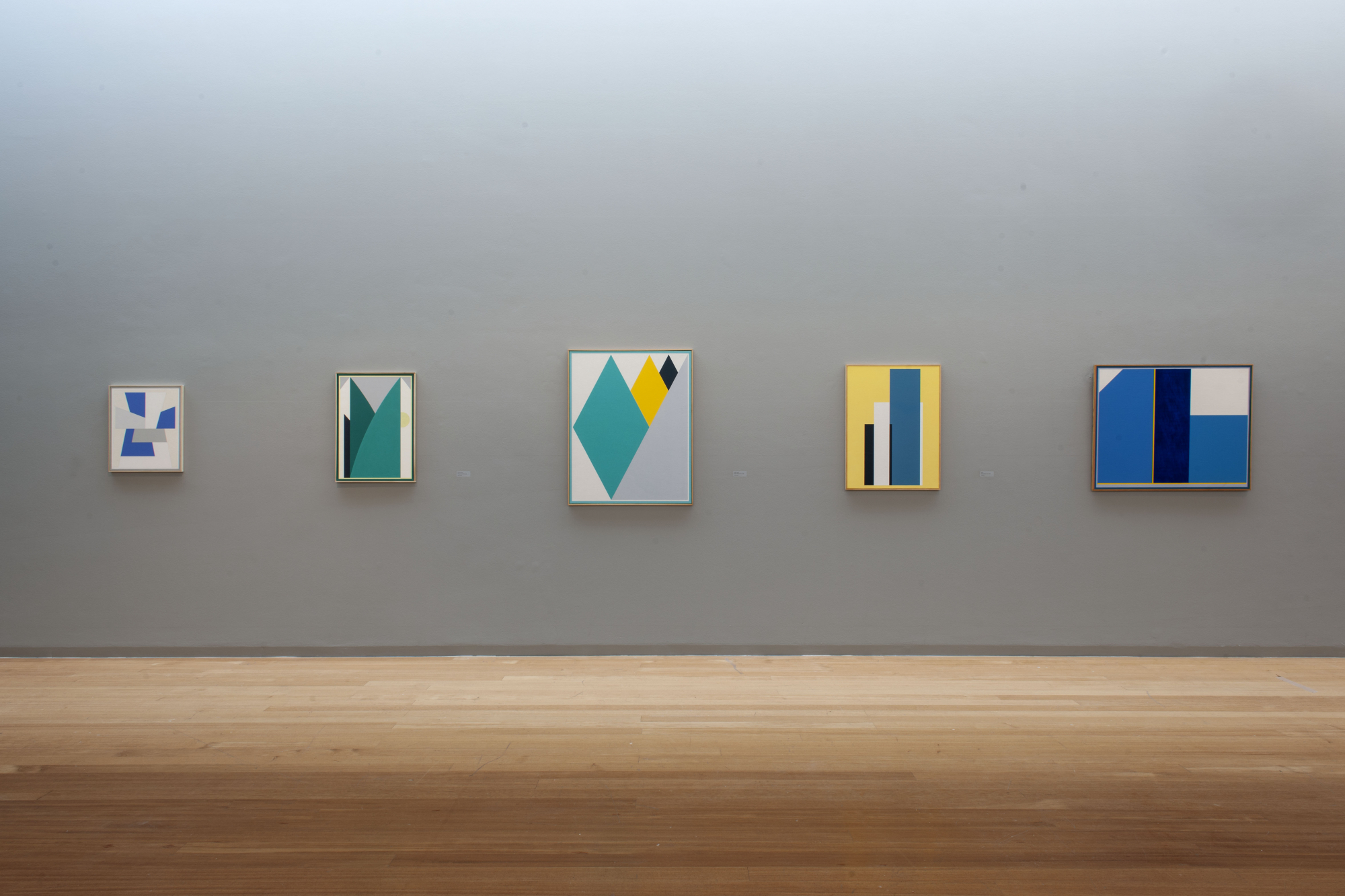 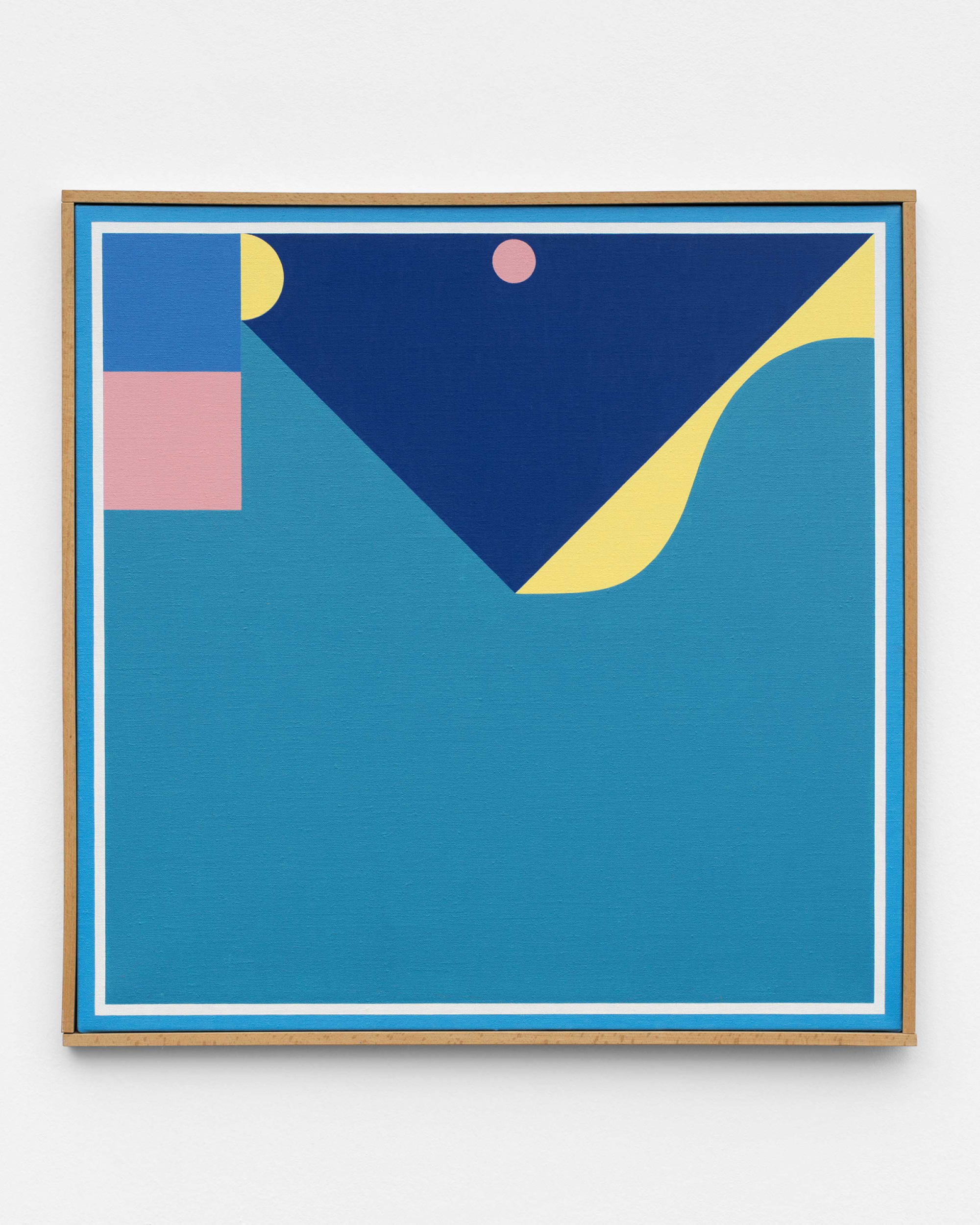 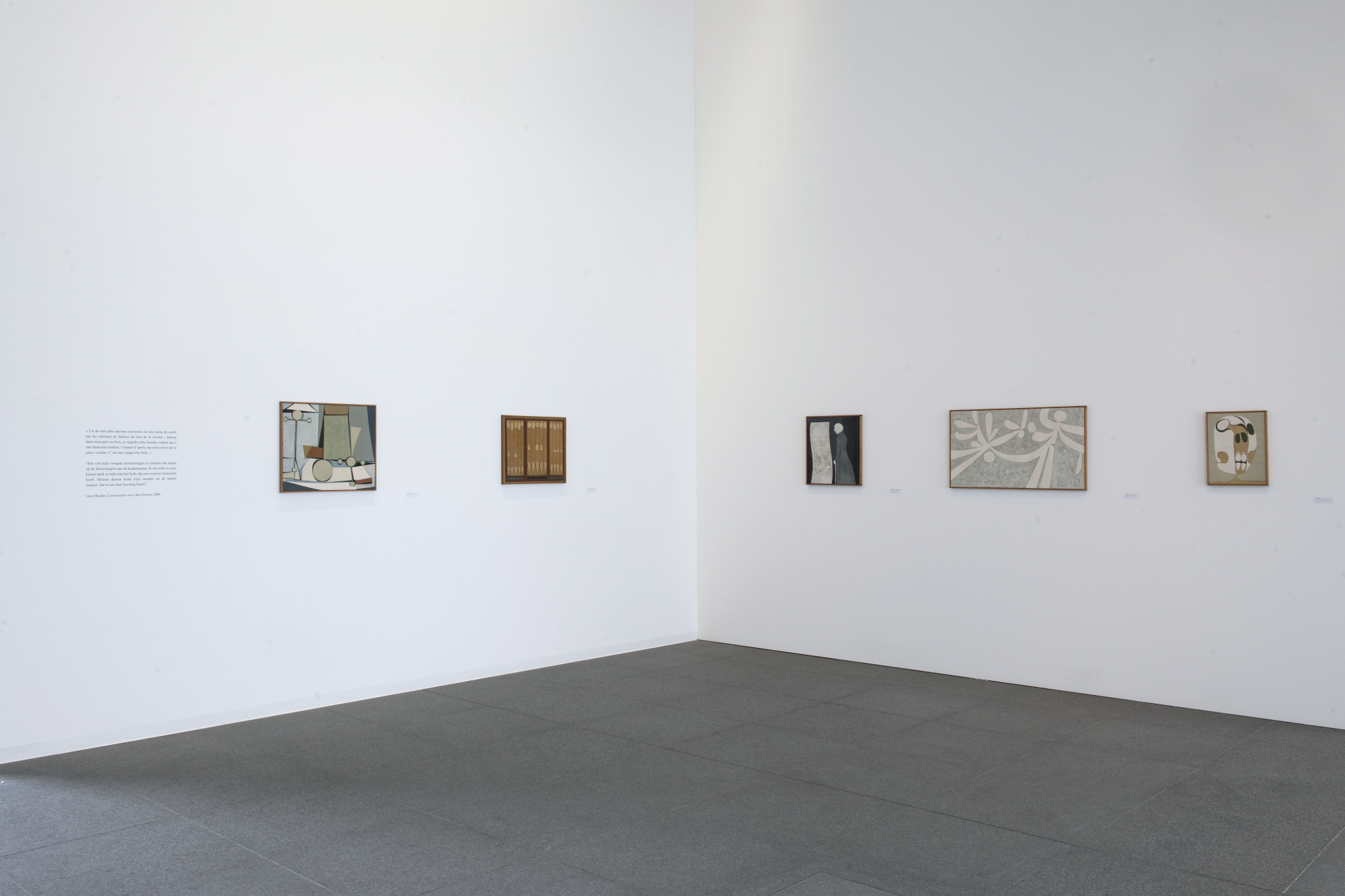 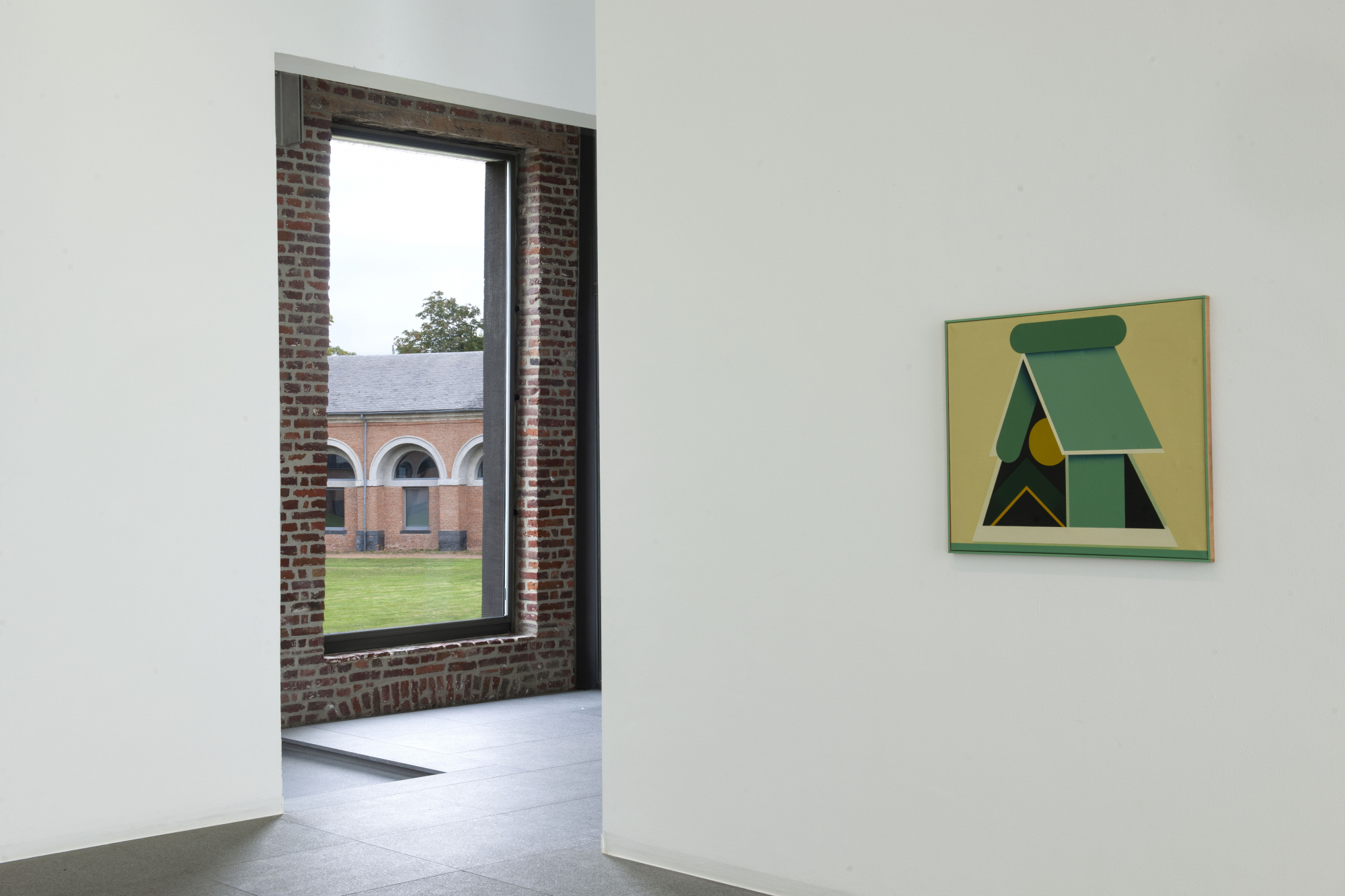 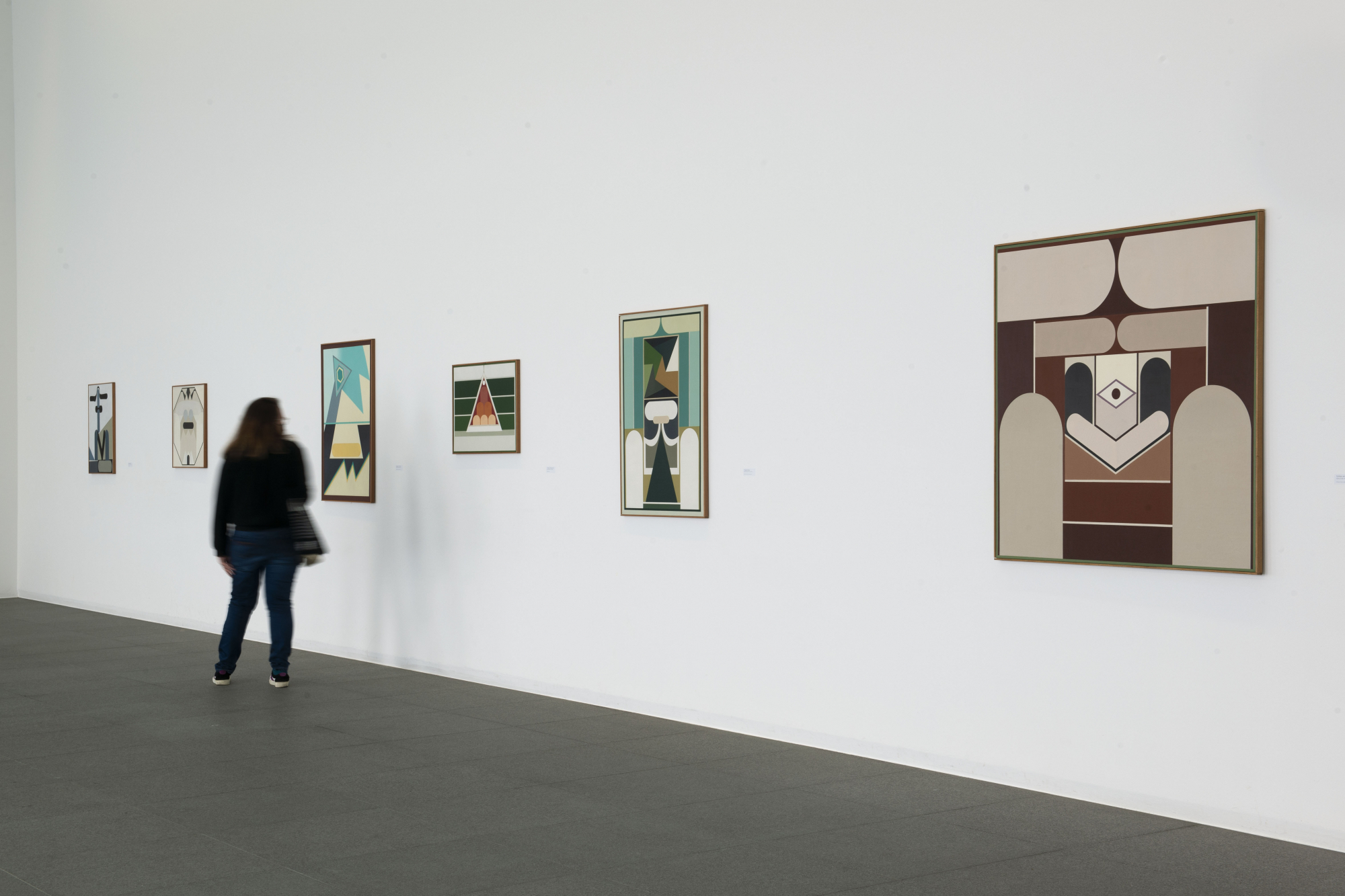 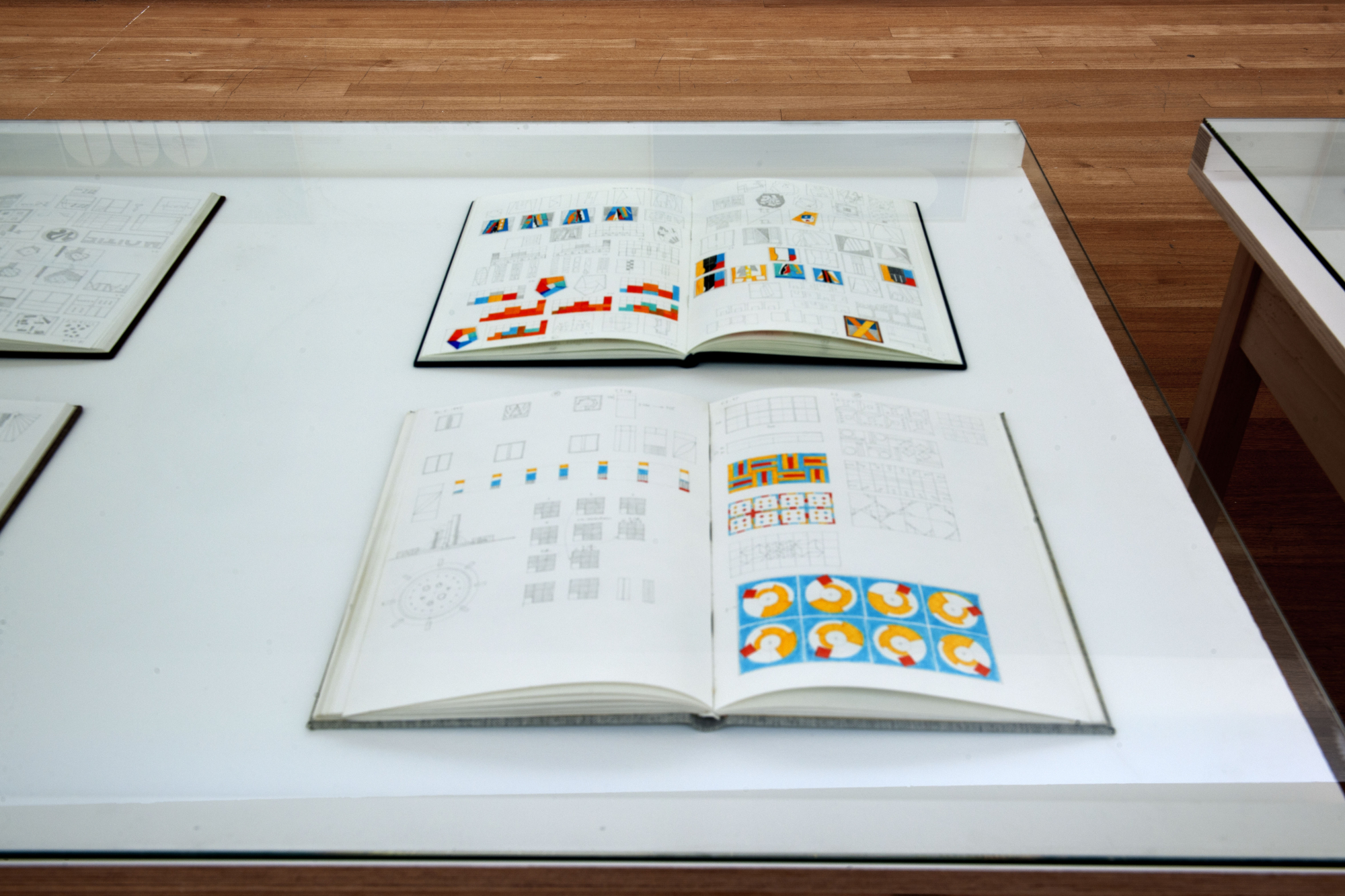 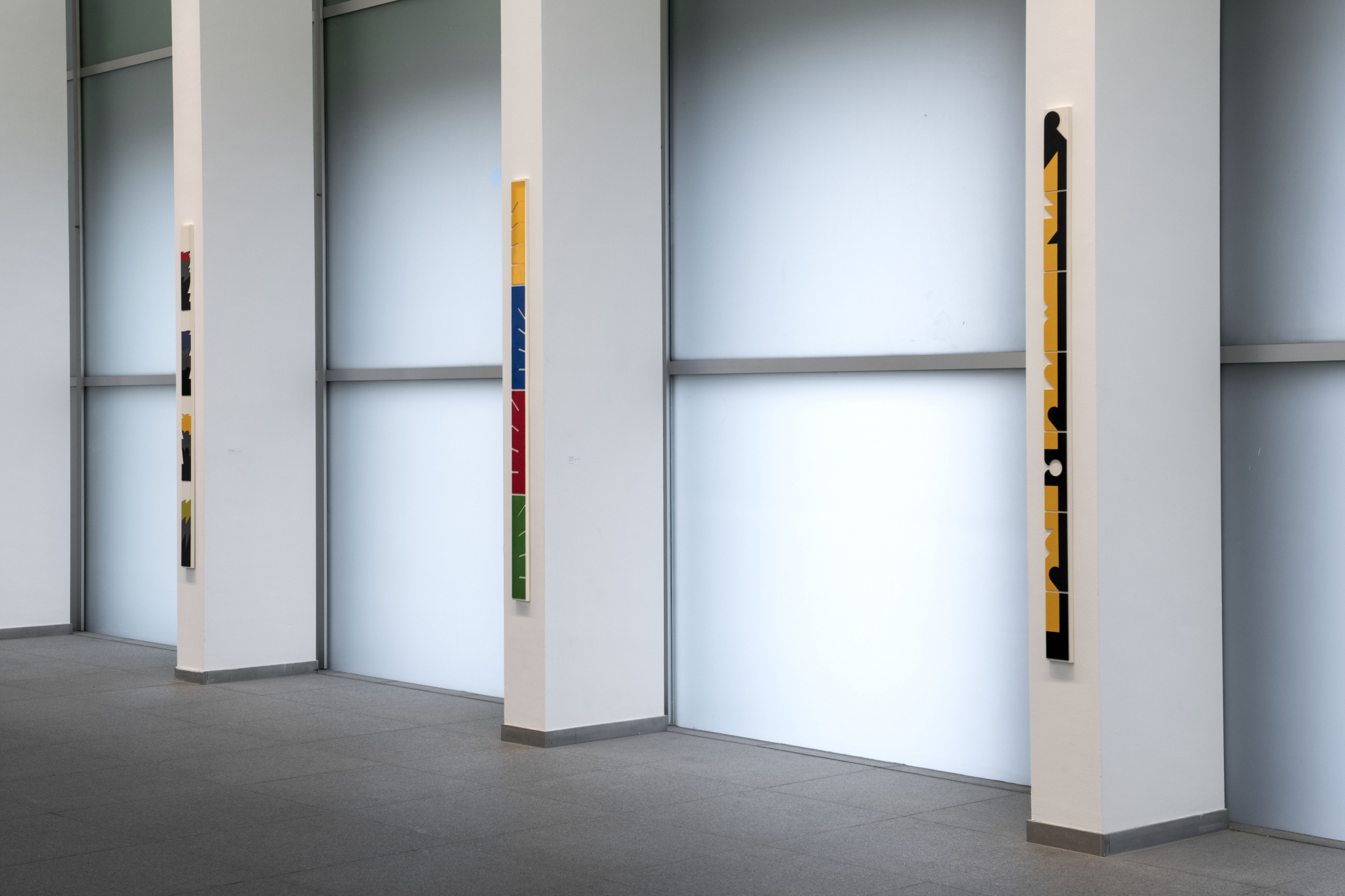 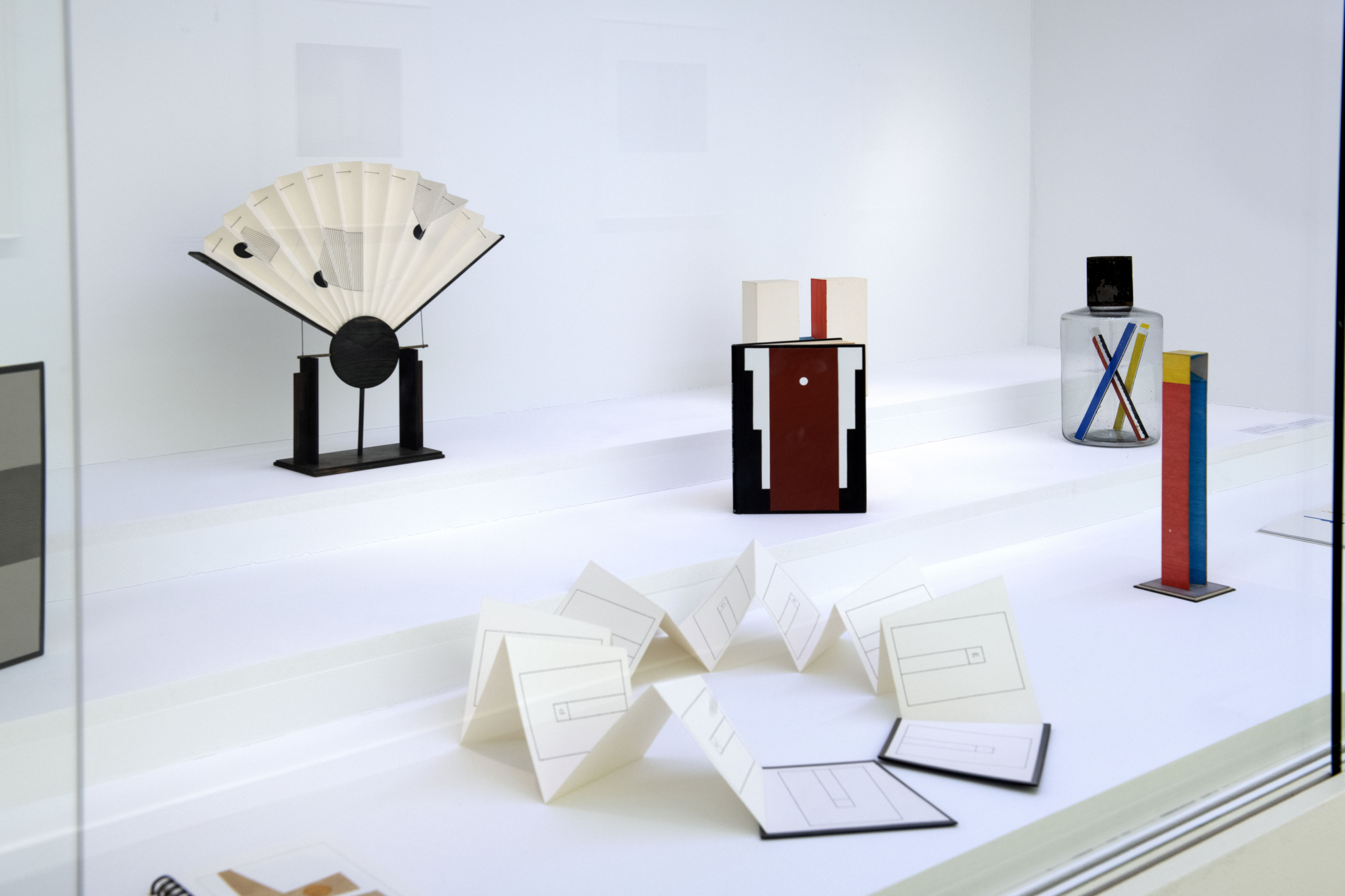 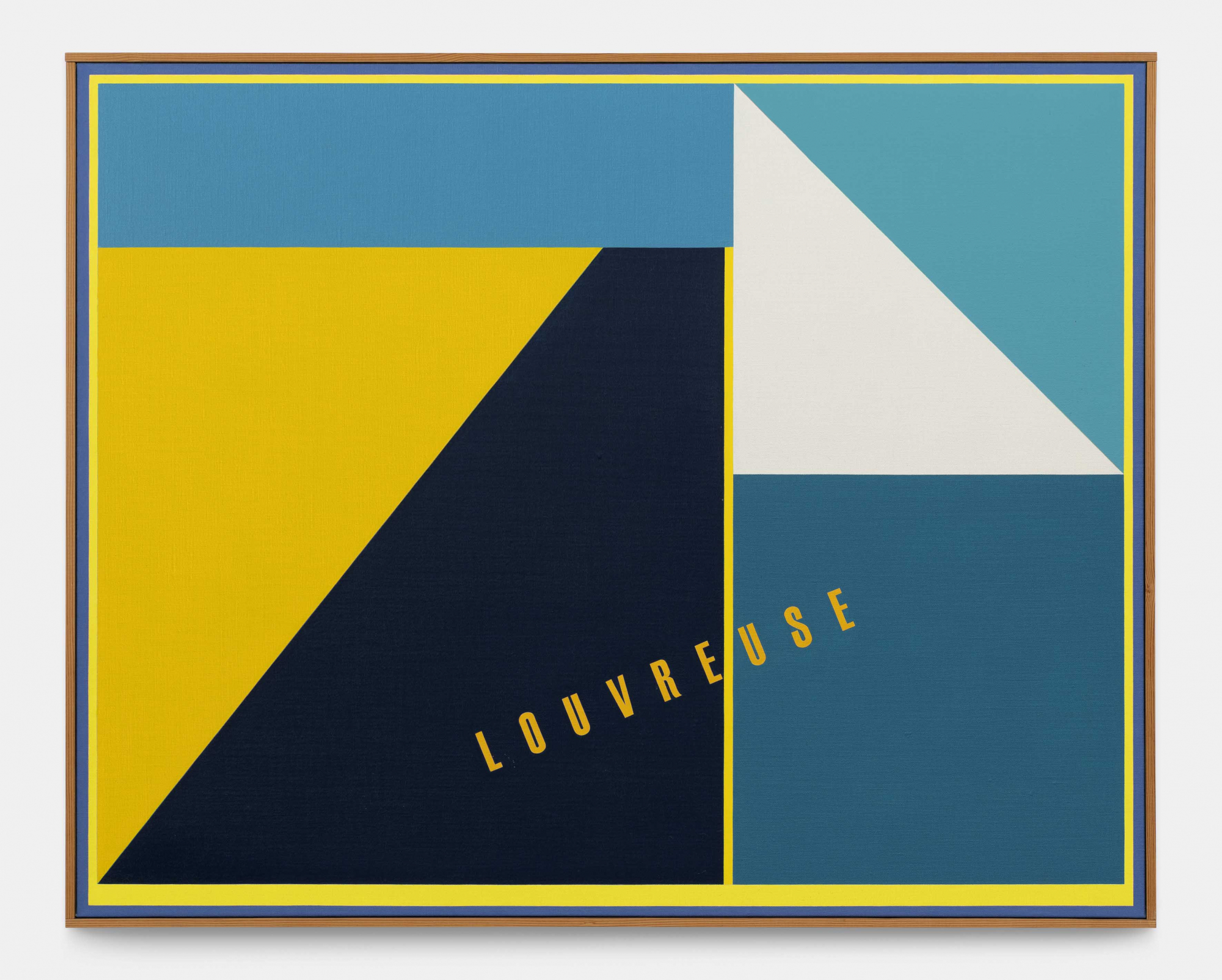 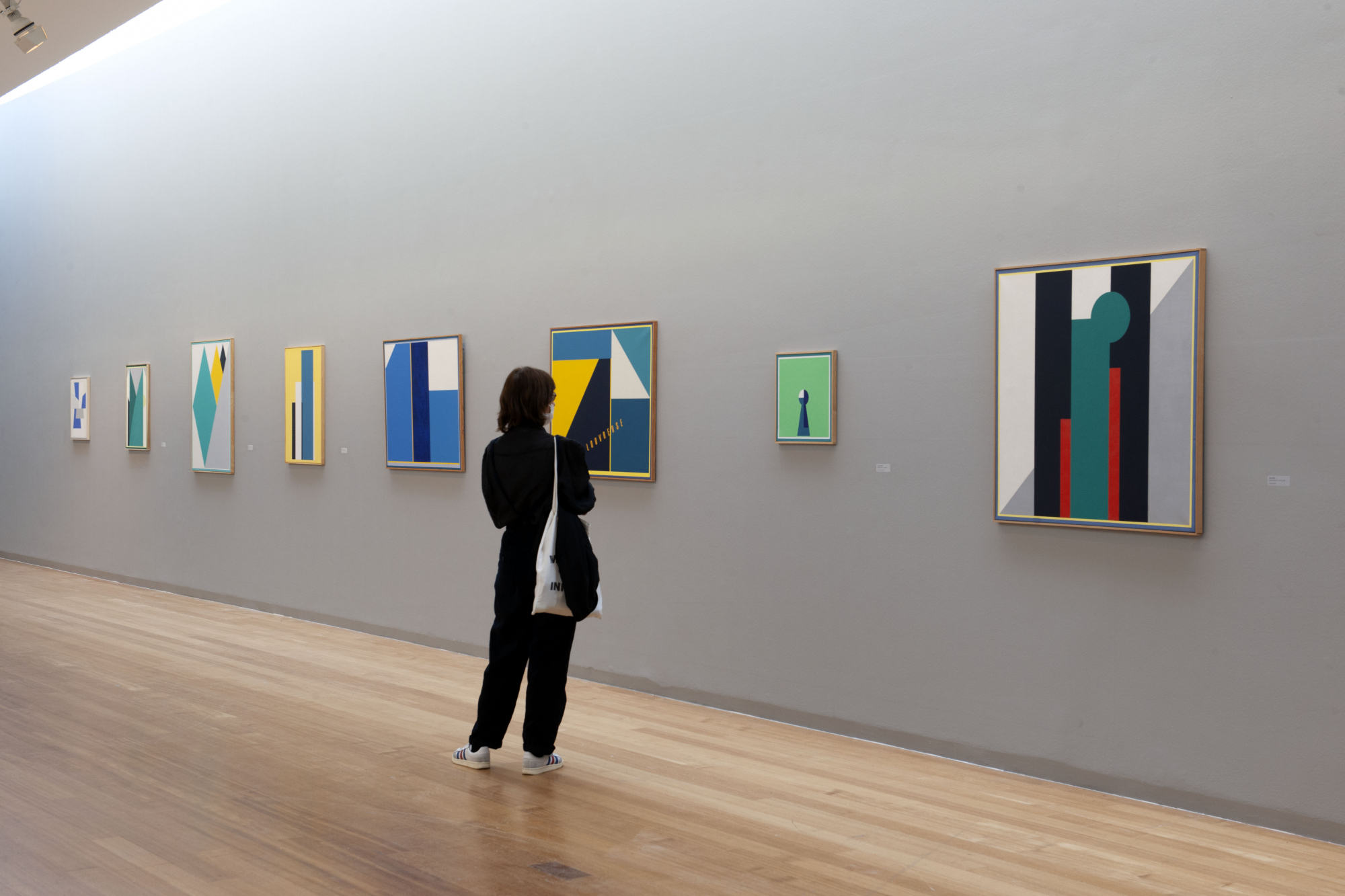 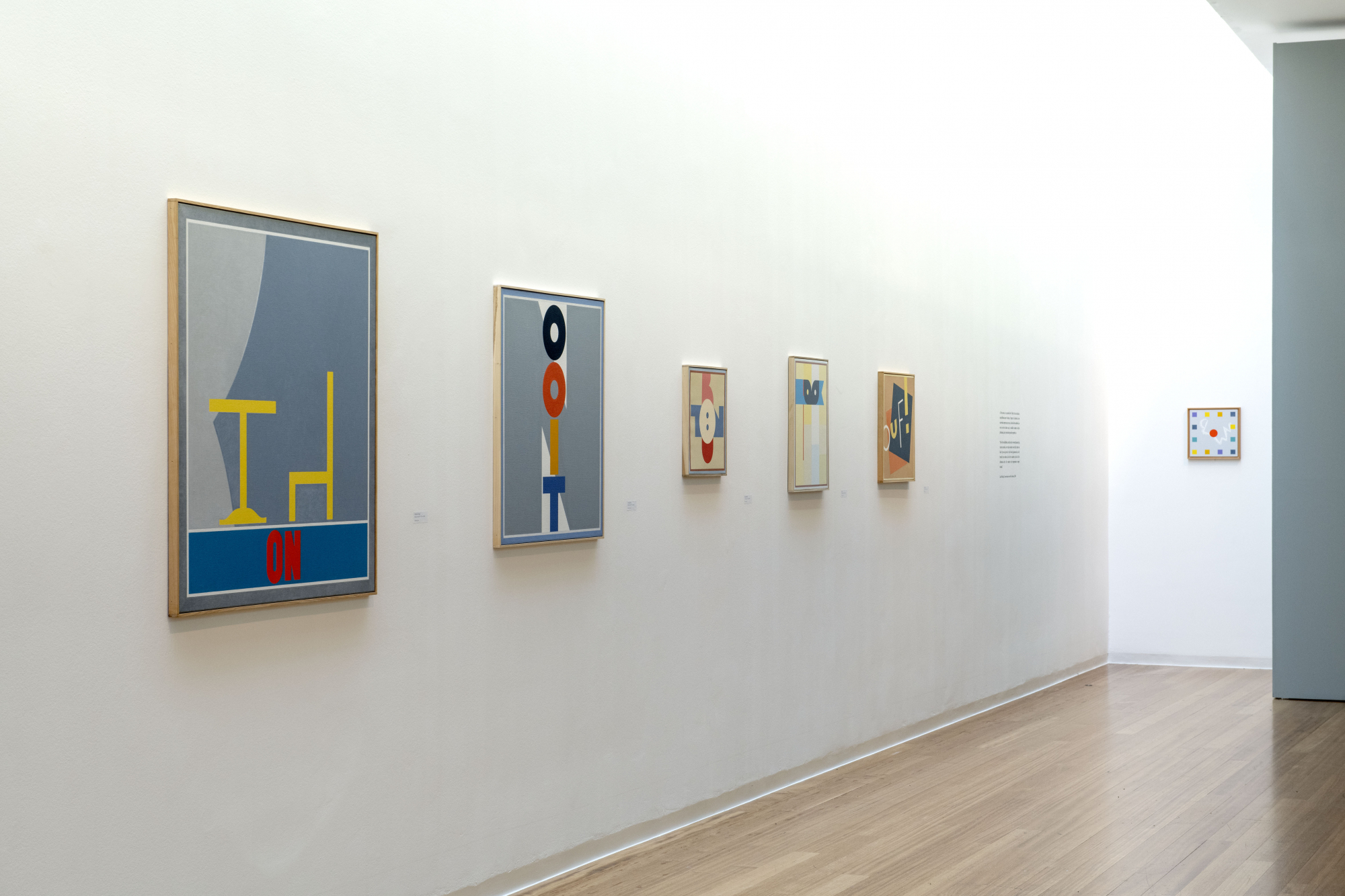 The MACS and the LaM are offering a reduced price* for the exhibitions Léon Wuidar. À perte de vue and Paul Klee, entre-mondes.

*on presentation of an entry ticket for the other institution. 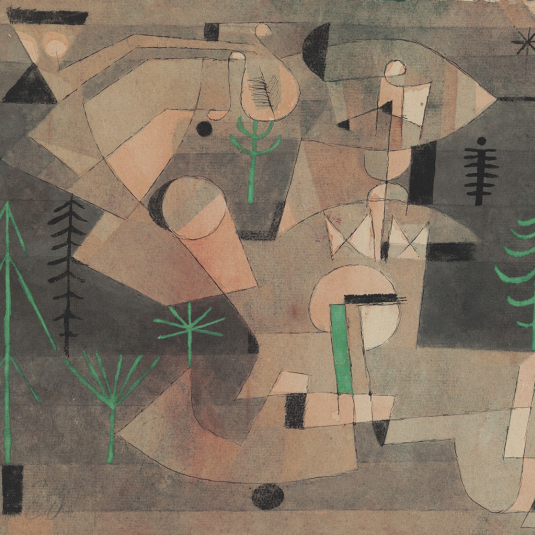 Clown is a lithograph created by the artist Léon Wuidar to mark the occasion of her exhibition at the MACS. It was produced in collaboration with the Éditions Bruno Robbe and can be purchased in the Grand-Hornu Artshop. 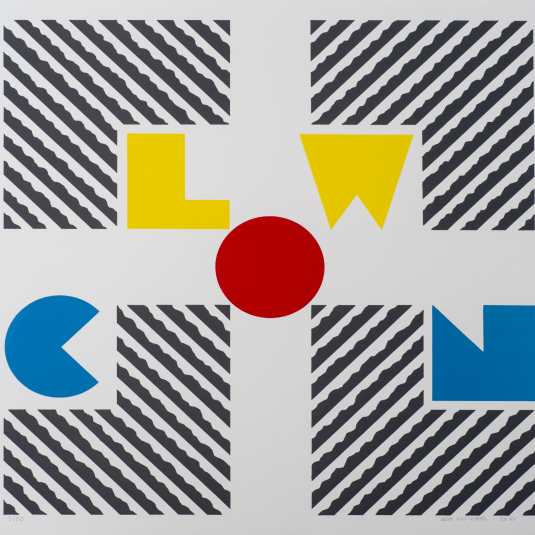 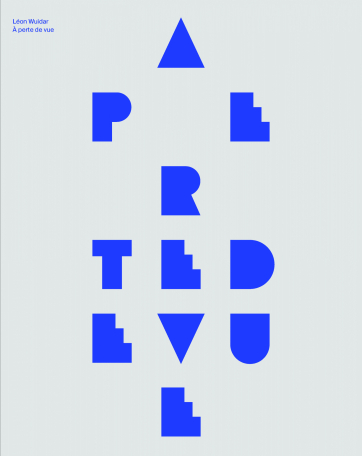