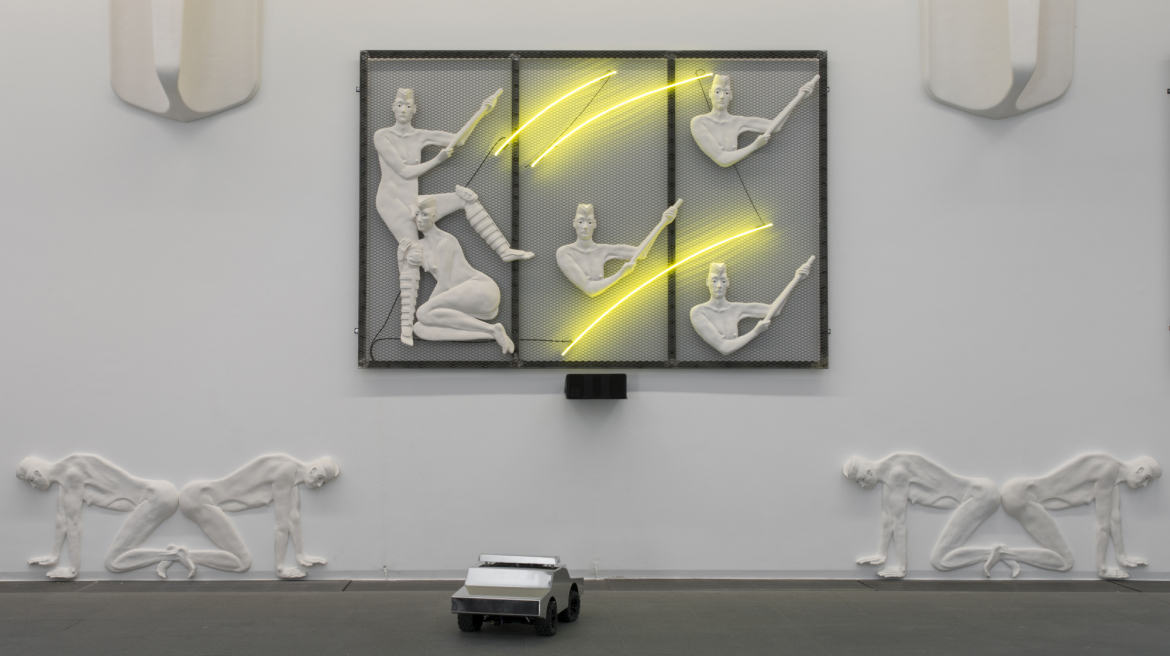 As its title Cruising Bye suggests, Aline Bouvy’s exhibition at the MACS is presented as a form of loitering, in that it is as much about sexual vagrancy and police patrols as stray dogs and queer flirtations. On the horizon of this poetic, transgressive deviation, we spy the utopia of a fluid sexuality which the visual artist assimilates less with pragmatic LGBT activism than an ongoing critique of the aesthetic and health codes which society uses to keep our bodies in check and contains its desires. Anticipating the end of mortifying inhibitions, her artistic approach undertakes an unbridled eroticisation of our environment by incorporating rundown materials, decadent postures, disused land and invalid organs. Her multidisciplinary palette, alternating thermoformed plexiglas, inlaid linoleums and remote- controlled vehicles, surprises the public through its infringement of good taste and its disregard for taboos. Through its references to Clarism, a transgender mystical movement founded in the 1920 by the German artist Elisarion, Aline Bouvy also revisits the slow, utopian trajectory of a culture that is turning away from the dominant models of patriarchy and heteronormativity. Reaching beyond the norms of bourgeois morality and the boundaries of political correctness, her works even wave them an insolent bye bye in passing, signalling an irreversible mutation of society. A veritable ode to freedom, Aline Bouvy’s exhibition Cruising Bye thus takes on the poetic appearance of a “wild parade” in which a procession of androgynous police officers (complete with sirens) appears alongside a witches’ Sabbath (under belladonna).

In line with this notion of cruising highlighted by the exhibition’s title, the visit through the museum’s rooms has been designed as a meander consisting of three main stages: the discovery of the series of linoleums that Aline Bouvy made between 2014 and 2016, the immersion in the new version of the interactive installation Potential for Shame (2021-22) and outside the building, an exploration of a series of sculptures which anthropomorphise the architecture of the MACS. 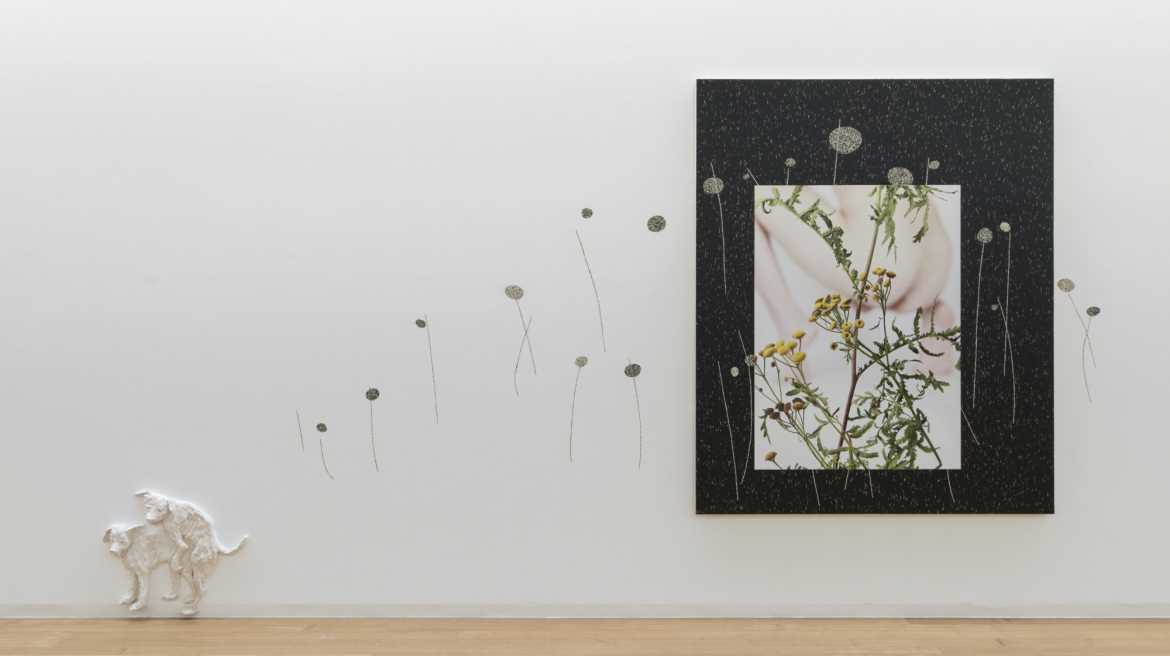 Aline Bouvy uses the marquetry technique to work with linoleum. She deliberately limits the palette to black and grey tones, whilst varying the textures with a range of speckling and moiré effects. The artist diverts this natural material, normally used to make floor coverings, and turns it into one of the essential elements of her visual signature, using it sometimes as a frame for her photographs (Urine Mate series), sometimes as the main or even the sole material (Interruption in the Social Contract). In the series of linoleums Politics of Intimacy (2014), Aline Bouvy strove to express “a certain way of being in the world, how to fit in, how to live, love, sexuality, human relationships and art”. Indeed, the blurred, speckled appearance of the surfaces emphasises the psychological dimension of these “mental landscapes”, in which photos or 3D objects are sometimes inserted like explorations of intimate territories. The Urine Mate series (2016) also offers several avenues for interpretation related to the notion of intimacy seen through the prism of moral codes and mores of a patriarchal society. With her photos of male nudes that disrupt gender stereotypes, Aline Bouvy takes us into marginal territories: areas of loitering and cruising, like the “wastelands” to which the “weeds” refer in the foreground of the nudes. The title of the Urine Mate series refers to the existence of spaces specifically reserved for the “male community”, thereby questioning the place of women in society, but can also be understood as a deformation of urine-made, as Aline Bouvy has, in fact, used her own urine to make her plaster and the resulting sculptures, whose traces can be seen in certain photographs integrated in her linoleums. Plaster and urine also combine in the casts of stray dogs, which appear like “footnotes” under certain linoleums, in homage, the artist tells us, to “the insolence and irreverence of city animals”.

In order to emphasise the impression of cruising, Aline Bouvy has placed “speed bumps” along this first part of the route, which aim to highlight the importance of slowness in the practice of cruising, understood in the sense of “loitering” but also of “police patrol”. Crossing through this first room which houses the linoleums and shows their evolution over time, reversing the modernist code of passing from figuration to abstraction, is also slowed down by a series of large sculptures in thermoformed plexiglass, Empathy (2014), evoking a fluid, deformable surface such as water. Somewhat flaccid eels, which could evoke excrement or a phobia of bodily intrusion, penetrate them through orifices. The work thus weaves connections of attraction-repulsion with the viewer, in what Aline Bouvy calls an aesthetic of the grotesque, transcending the notions of good or bad taste.

Occupying the entire large hall of the MACS, Potential for Shame (2022) is the augmented version of the installation Splendeur et Décadence des Sirènes which Aline Bouvy created in 2020 for NEW SPACE in Liège, then subsequently presented at the Kunsthal in Ghent. Produced in collaboration with Julien Bouille for the robotic programming and Pierre Dozin for the sound composition, this project, which notably received production assistance from the museum, is presented as a form of subversive theatre or grotesque arena where repressed sexualities meet authoritarian figures. The public can choose to mingle with the scene or leave it by taking their place on the stage.

On the ground, cars equipped with artificial intelligence move around the space. Programmed to reproduce the characteristic trajectories of police patrols, the vehicles which are equipped with sound adapt to the behaviour of the public who, in turn, interact with them. The sounds emitted vary according to the choreography adopted by the cars, and evoke police sirens as well as the repression of illicit behaviour, such as sex in public places. Understood as an allusion to mythological chimeras, the “song” of the cars exerts a disturbing power of fascination through something akin to orgiastic music. On the walls, a monumental frieze displays another choreography of figures/dolls: rigid police officers stripped of their uniforms and physically effeminate (with overdeveloped nipples) flirt and display lascivious postures (BDSM). The upturned urinals which thereby take on the shape of a vulva and the yellow neon lights that describe jets of urine (golden shower) confirm the allusion to non-normative, taboo sexual practices. 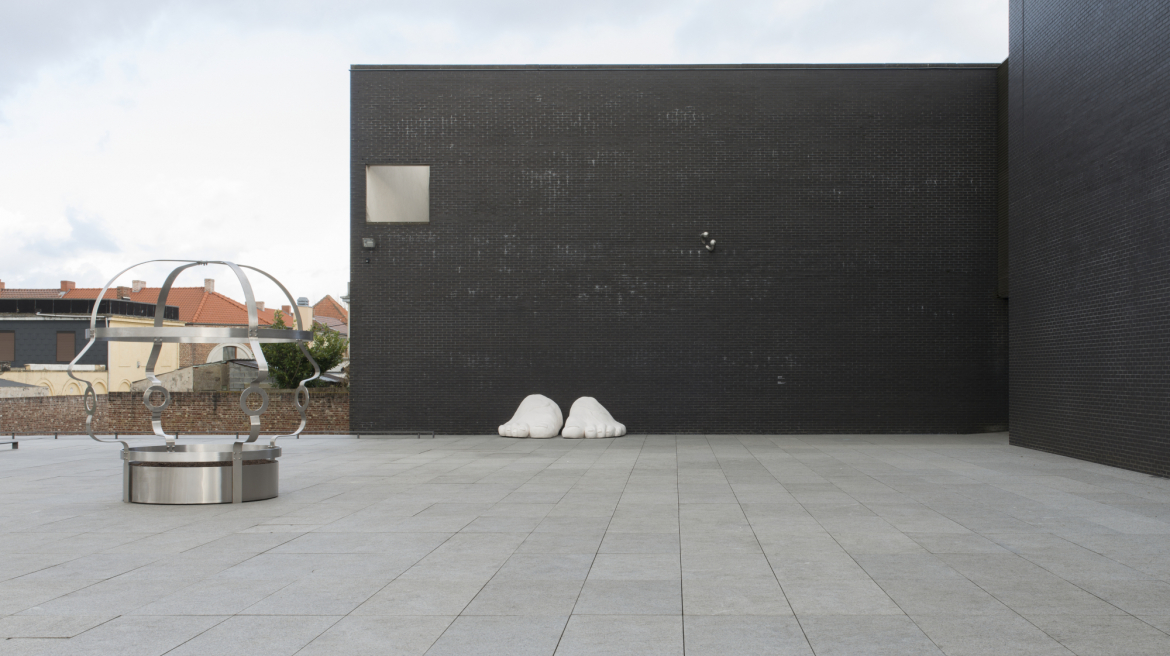 The exhibition itinerary ends with the installation of several sculptures outside the museum: Enclosure (2021), Bastinado (2018) and Wall Piercing (2018). A tall, brushed stainless steel structure describing a feminine profile, Enclosure is an allusion to the “Scold’s Bridle”, a device used in 16th century England to publicly humiliate women who “talk too much” and “disturb public order”. At this same time that it was developed, also in England, the Enclosures movement witnessed a privatisation of agriculture characterised by the progressive abolition of common lands and the development of an economy seeking to maximise profit. This evolution took place to the detriment of women, who were thereby confined to a non- monetised, reproductive activity (producing “human resources” by raising children, etc.). The feminist author Silvia Federici, whose work Caliban and the Witch inspired Aline Bouvy for this piece, indeed draws a parallel between the witch hunts that demonised “proletarian women” and the rise of capitalism. In the interior space of Enclosure, a symbol of patriarchal domination, Aline Bouvy has sown belladonna, a highly toxic plant that also has therapeutic, cosmetic (it dilates the pupils) and hallucinatory properties. Belladonna was associated with the witches’ sabbath and by extension with the taboo surrounding female pleasure, as the plant could induce states of ecstasy. Made of Jesmonite, a recent material that was first developed to create theatre sets, the giant feet of Bastinado anthropomorphise the museum to observe it from a new perspective.

The feet can thus become benches on which visitors are allowed to draw graffiti. Likewise the Wall Piercings also invite us to perceive the museum as a large body which Aline Bouvy pierces, in her characteristic insolence, with signs belonging to the same underground sexual subculture as the installation Potential for Shame with its queer frolics. 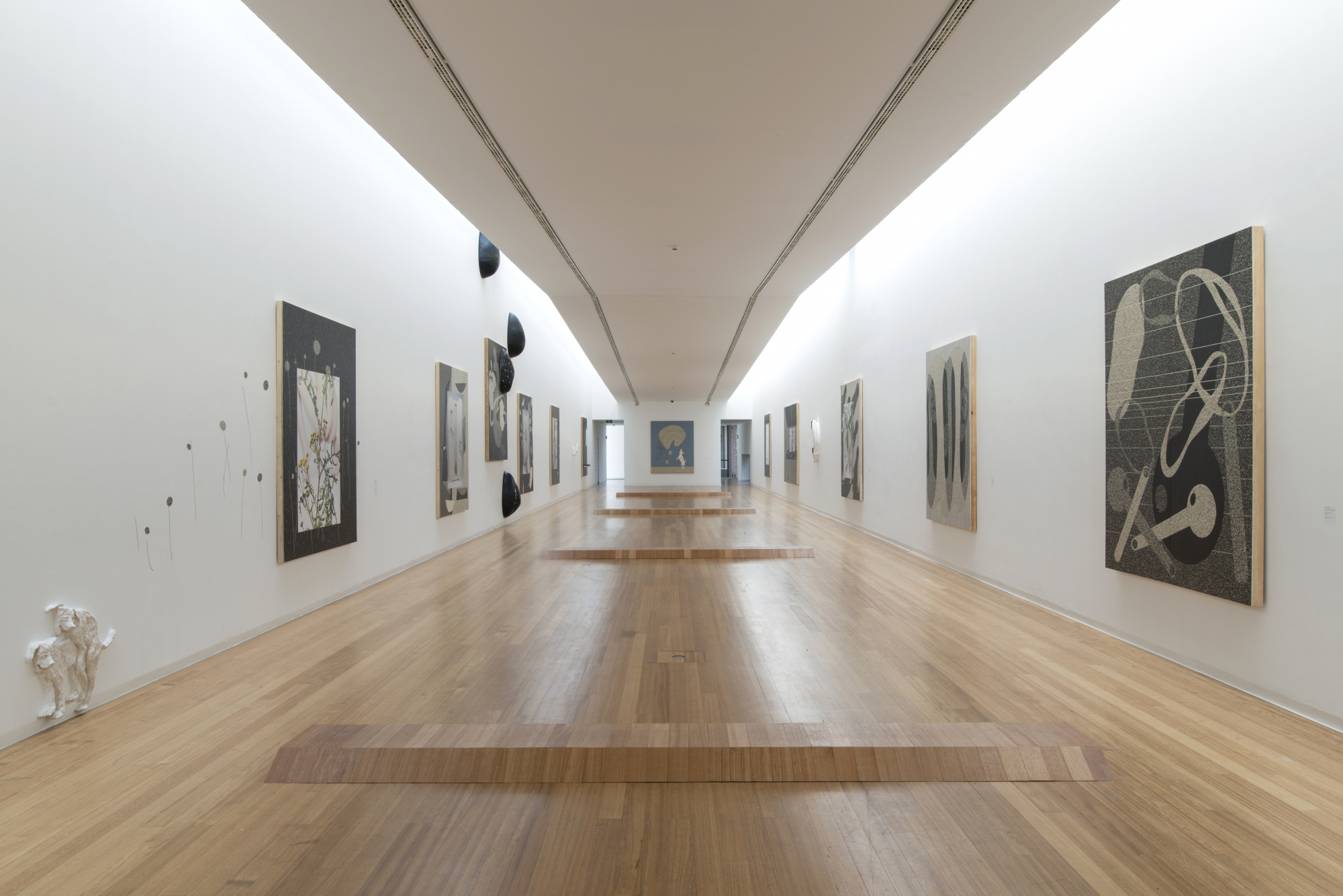 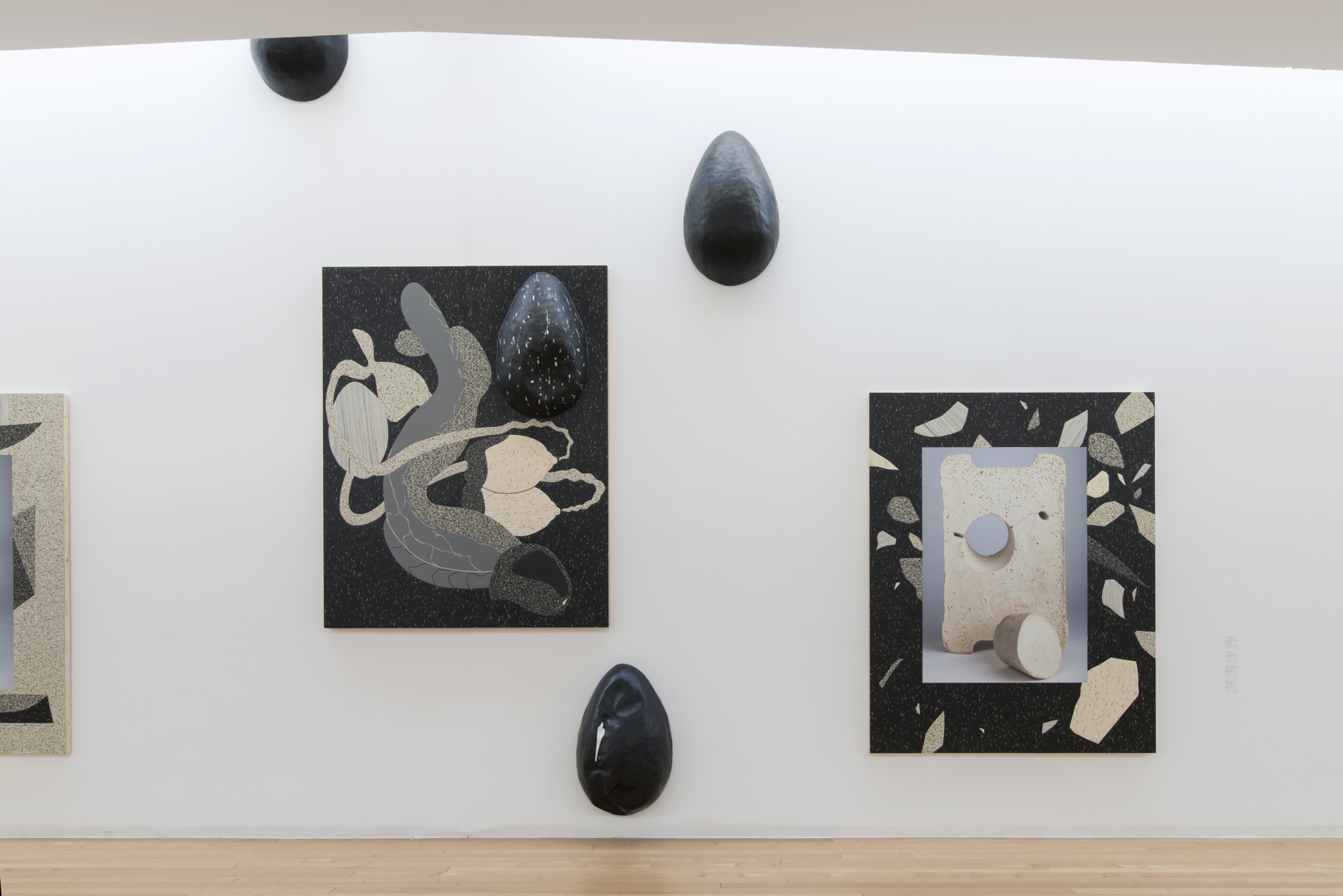 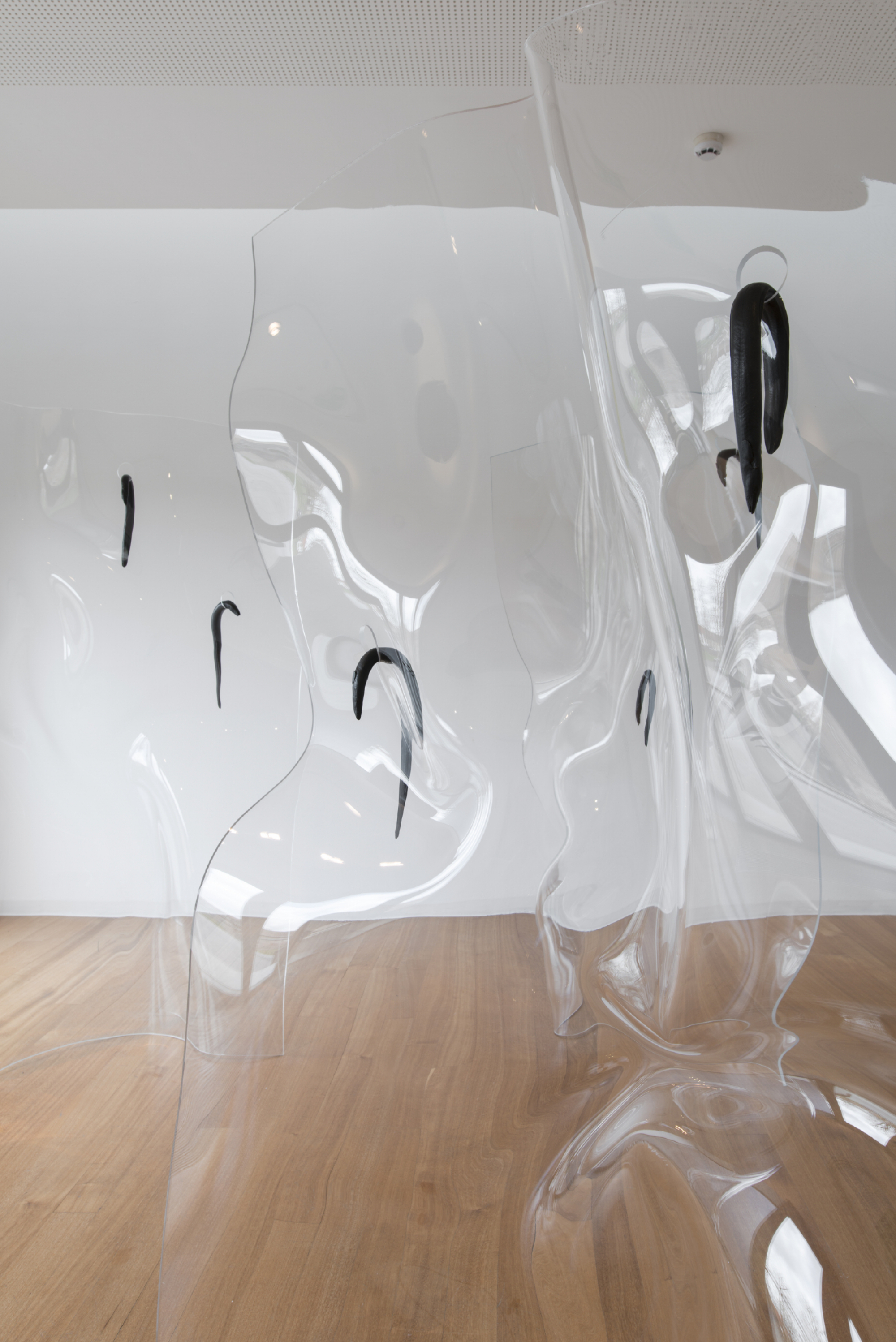 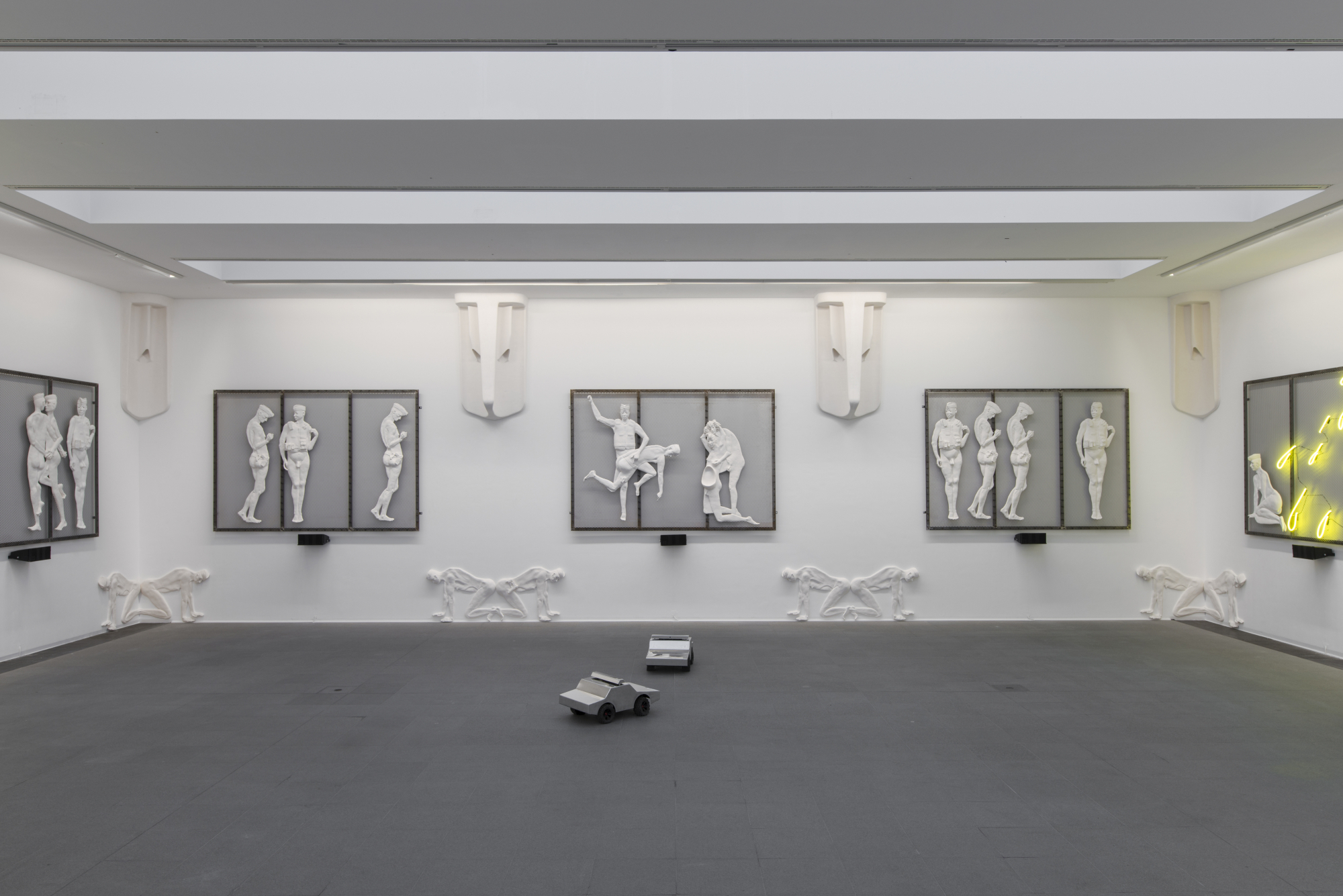 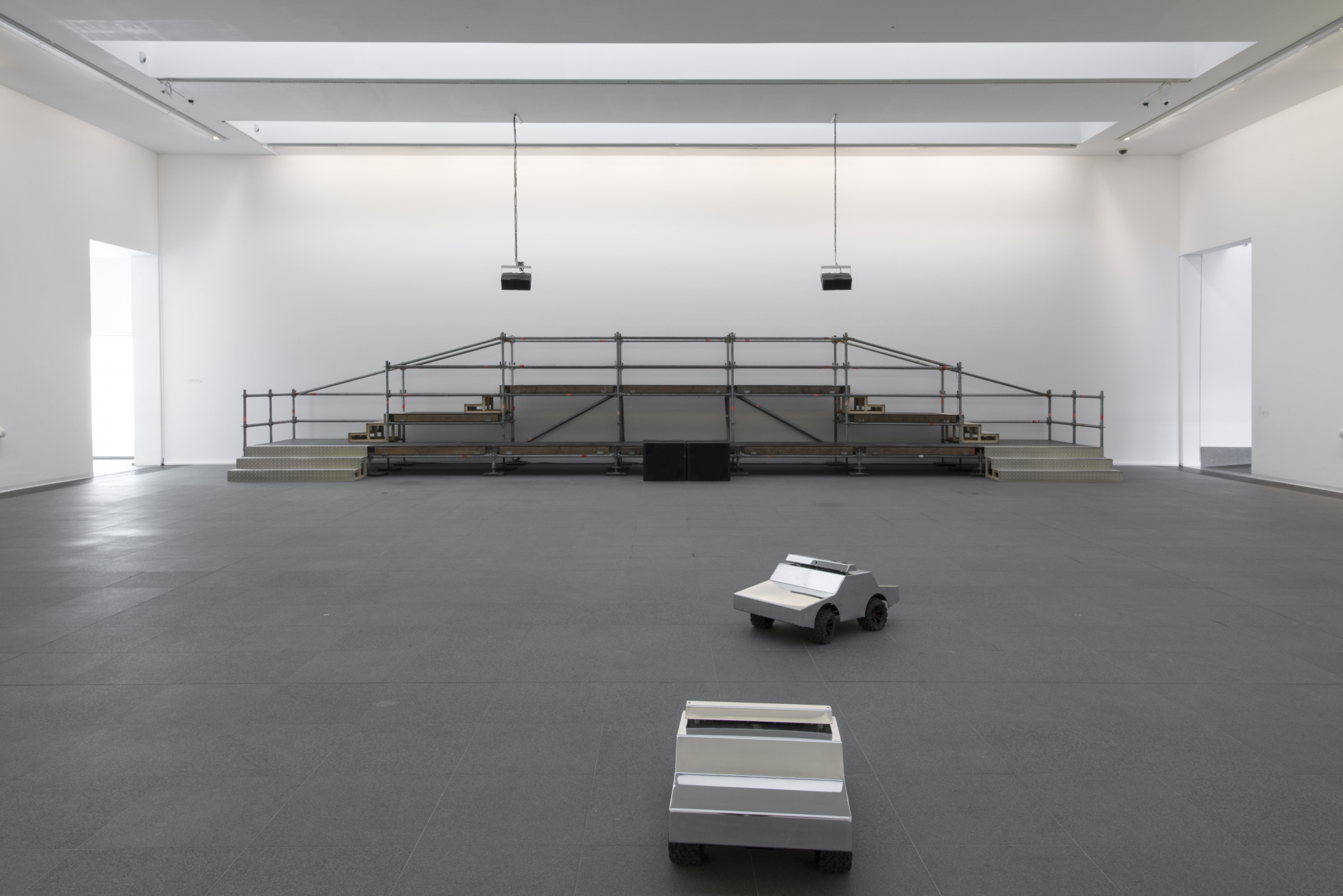 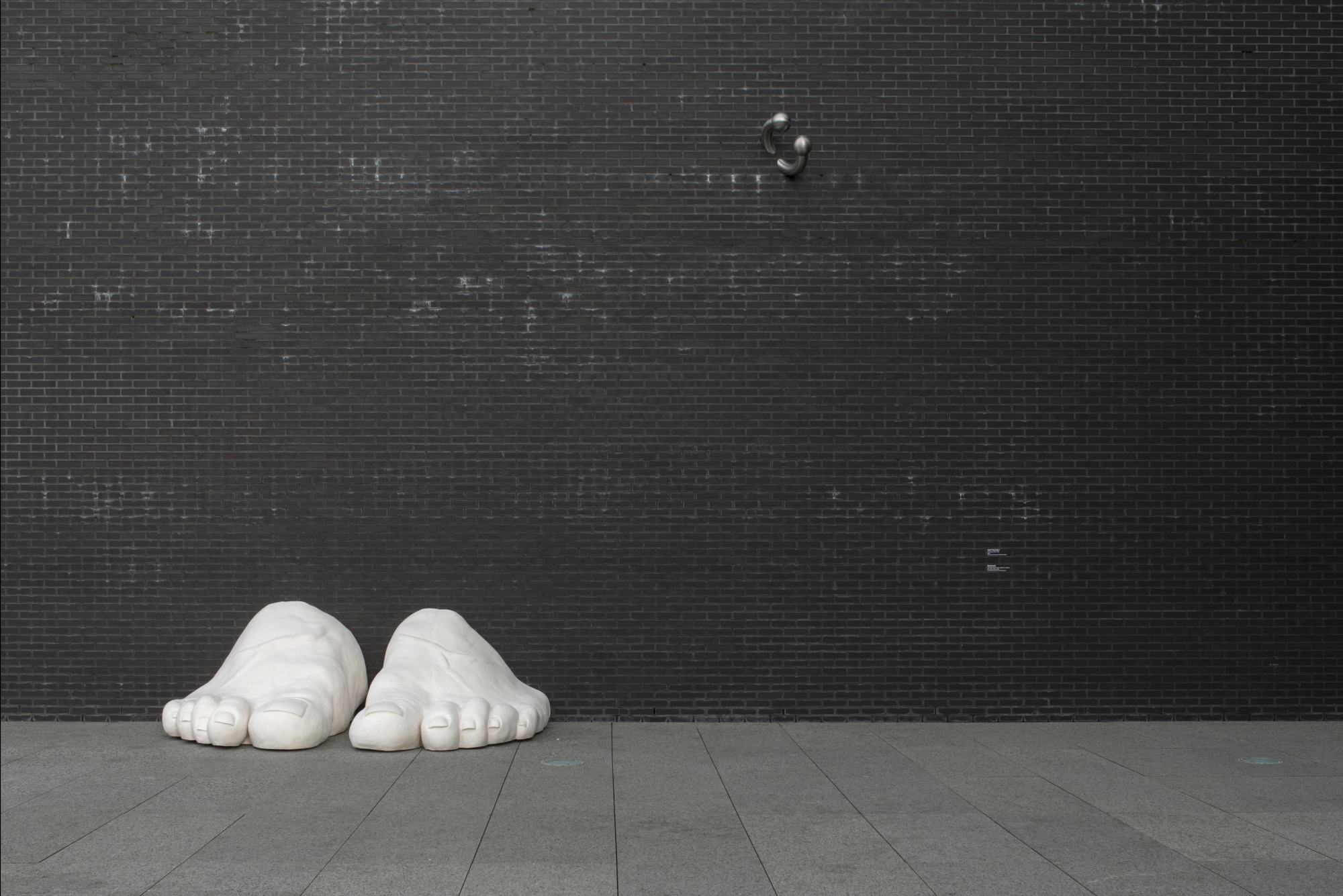 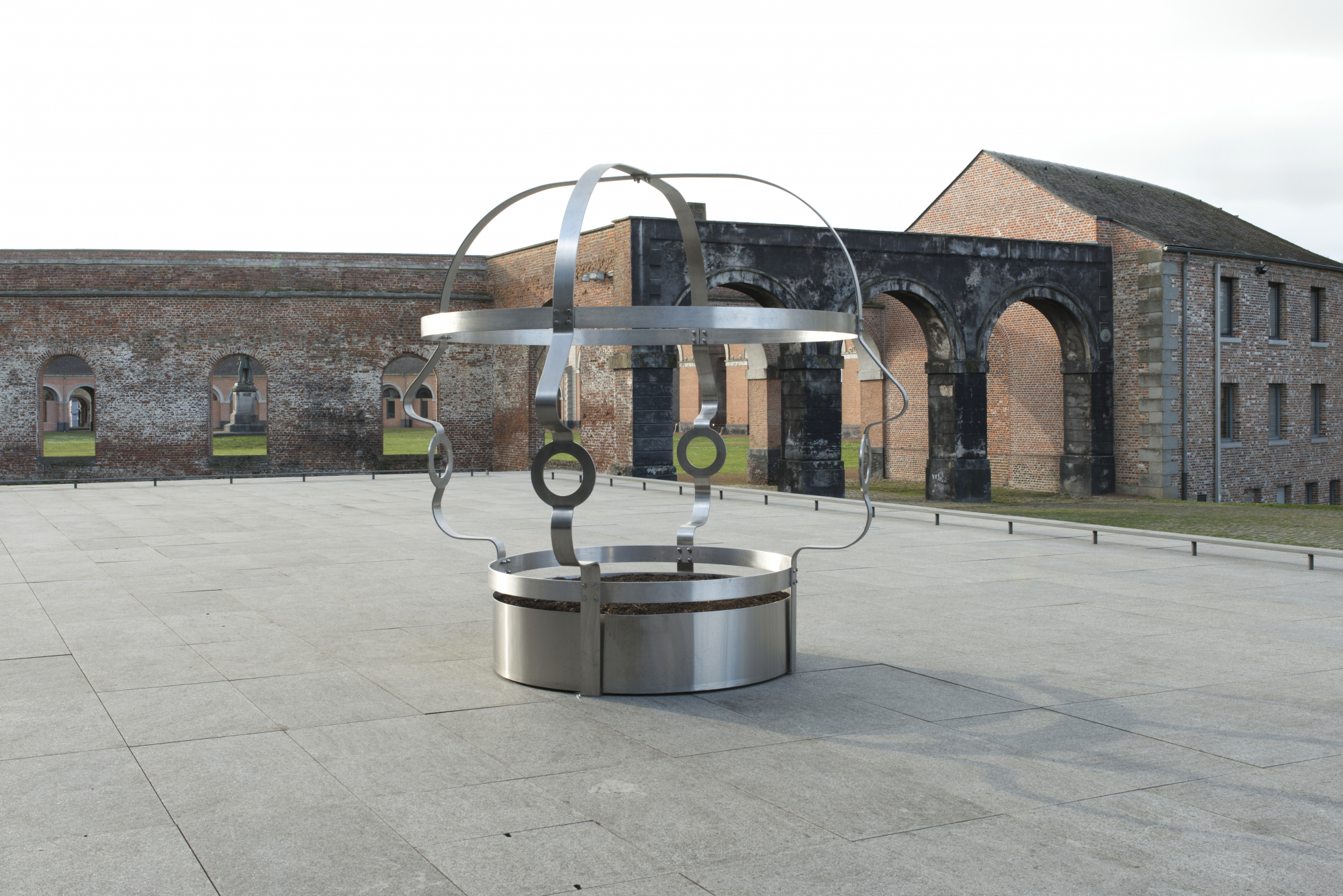 Aline Bouvy (1974, Belgium) lives and works in Brussels. After studying at the ERG (School of Graphic Research) in Brussels then at the Jan van Eyck Academy in Maastricht, the multidisciplinary artist of Luxembourg origin has taken part in numerous residences and exhibitions (collective and solo) mainly in Europe (Kunstraum, London, 2015; Galerie Baronian, Brussels, 2018; Galerie Nosbaum Reding, Luxembourg, 2018; Künstlerhaus Bethanien, Berlin, 2019; Kunsthal Ghent, Belgium, 2021). She worked in partnership with the artist John Gillis for 13 years. Since 2013, she has developed a solo practice. 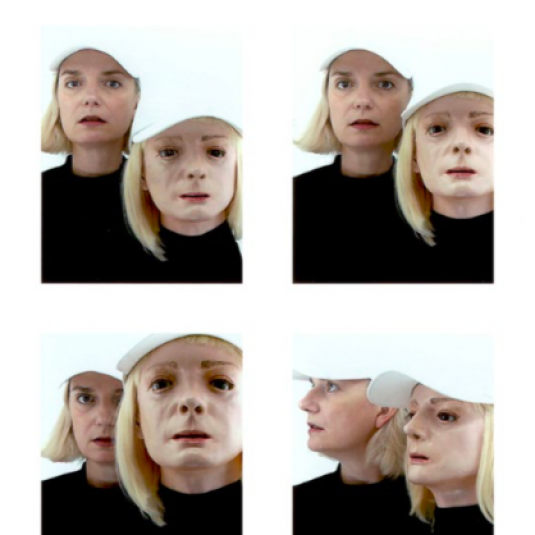 Sheer Impotence is a lithograph created by the artist Aline Bouvy to mark the occasion of her exhibition at the MACS. It was produced in collaboration with the Éditions Bruno Robbe and can be purchased in the Grand-Hornu Artshop. 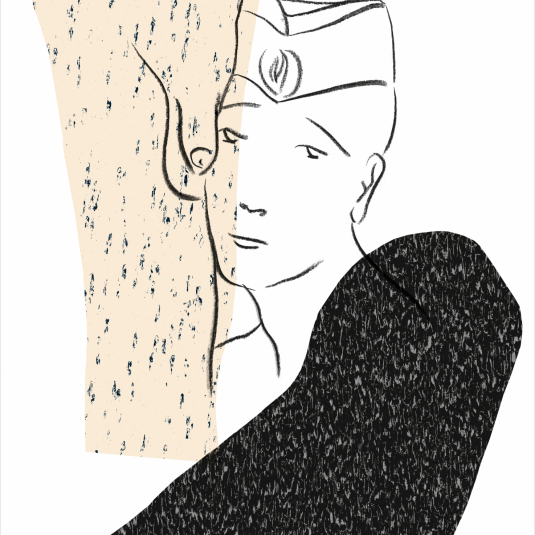